Hello PokeBeach readers! It’s Jimmy Pendarvis back with another article discussing the Expanded format! I recently got back from St. Louis Regionals, so I am going to start with a summary of my experience there. I’ll then move onto discussing the Expanded format as a whole. I will address what I would be testing for Portland if I planned to go, and share my opinion on how the matchups go. Hopefully this can get you guys in gear for preparing for Portland or any other Expanded tournaments you may have coming up, as I have learned that preparing for Expanded is a little bit harder than preparing for Standard simply due to how many decks are viable in each format! Without further ado, let’s get right into the swing of things with my St. Louis Regionals discussion.

I have recently been adopting the strategy of playing decks that have a good chance against everything, and then just building them to be as consistent as possible. I have found far more success with this strategy than my previous one of trying to counter the meta because I don’t really run the risk of hitting several autolosses and playing unwinnable games. This led me to start testing Mark Garcia’s Yveltal / Maxie’s list, and I only ended up making a couple changes. Let’s take a look at what I settled on. 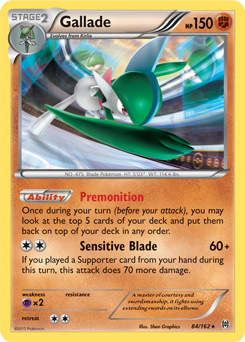 In testing, I not only found that Gallade and Archeops are required to win certain matchups, such as Carbink BREAK / Zygarde-EX, Eelektrik / Raikou, and Seismitoad-EX / Decidueye-GX, but also that my win percentage was significantly higher when I was able to get out Gallade on the first or second turn. This got me thinking about how I would increase my chances of achieving a turn one Maxie’s, and a fourth Battle Compressor was the obvious answer. Another reason I chose to include a fourth copy of Battle Compressor was because I wanted my Dark Patch to be easier to use in the early game. I often found myself having to discard one due to a lack of Dark Energy in the discard, which slowed me down in a lot of my testing games.

I chose to include this card instead of the more popular choice of Ghetsis because I felt it was more helpful overall. Ghetsis was definitely incredible in some matchups, mostly the Battle Compressor decks, Night March, Vespiquen and Blastoise, but Hex Maniac felt like less of a hit or miss card. Hex Maniac shines against the turbo decks, Decidueye-GX, Volcanion and Eelektrik / Raikou, all of which were pretty popular in the tournament. By turbo decks I mostly mean decks that are reliant on early Shaymin-EX or Hoopa-EX to setup, which ended up being very popular in the form of Vileplume.

This card is quite popular in the deck, and does have its uses, so I wouldn’t blame you for playing one. It is consistently good against a few of the turbo decks. I have found Hex Maniac to be equally good if not better against Lurantis-GX / Vileplume, and only slightly worse against the other decks I previously mentioned. However, Hex Maniac almost never allows a player to instantly win the game, like Ghetsis can sometimes do.

I am definitely not a fan of this inclusion, but I have seen it being played in quite a few deck lists. It does allow for more aggressive starts and prevents you from being badly hurt by the prizing of your one Shaymin-EX, but I also found it making it harder for me to use Maxie's Hidden Ball Trick.

This record was definitely not what I was hoping for, and to make things even worse, I wasn’t fortunate enough to place in the Top 128 which left me at 496 CP. I was at least hoping to get my invite of off this tournament, but I will have plenty of chances in the future.

The following decks are the decks I would be testing heading into Portland. All of them are either Item-lock decks, which I consider to be extremely strong in the current Expanded format, or they are decks that have a solid chance against the Item-lock decks. I truly think Expanded is at a point where players should either be playing Item-lock, or playing decks that beat Item-lock.

I would still stick with the max consistency list I played at St. Louis Regionals, but two copies of Yveltal seems unnecessary moving forward. That being said, I would treat the second copy of it as an open spot for whatever card fits best based on the meta. I also talked about the deck quite a bit in my last article, so feel free to check that out if you want to hear more about my thoughts on the deck.

With most Vileplume decks, it is a disaster if Vileplume gets trapped in the Active spot for a few turns because it gives the opponent a ton of time to set up. In some cases, this can even lead to the Vileplume player decking out. However, due to Decidueye-GX being able to place damage even if Vileplume is trapped Active, it isn’t as big of a deal with this variant. In addition to that, Float Stone can be attached to an Oddish or Gloom before it evolves into a Vileplume, which prevents any Lysandre shenanigans.

John played this card in his list, and I see where he is coming from, already playing Level Ball and all, but I really don’t find this inclusion necessary unless more tech Supporters are added. He did also run a Xerosic, which I chose to remove for a third Level Ball, so that might be why he was a fan of Jirachi-EX. I don’t like the Bench spot that Jirachi-EX takes up, and I almost always feel like I would rather be using a Shaymin-EX.

AZ is so good in this deck because not only does it allow you to AZ Vileplume to either remove it from the Active or give yourself the option to play Items, but it works as a healing mechanism with Lurantis-GX. Think of it as a pseudo Max Potion.

This card can be super clutch for cycling back in Lysandre or AZ before Vileplume comes out or when Vileplume is getting AZ’d. Since this deck obviously can’t include VS Seeker, I really like the tech Pal Pad to provide a safety net in the early game.

Ross played this in his St. Louis deck list, but I am not a fan of it, especially going into Portland where the use of Pokemon-EX is at an all time low. It can be helpful for math if it actually makes its way onto the board before Vileplume comes out, but I think I would just rather have a consistency card instead, so I chose to remove it for a third Acro Bike.

When removing the Silver Bangle, I was torn between Battle Compressor and Acro Bike. The key combo in this deck is using Battle Compressor in combination with Revitalizer to search out your Pokemon. The fourth Compressor feels unnecessary as long as one of the other ones is found on the first turn, but only playing three does decrease your chances of finding it. I really like Acro Bike because the most important card to find on the first turn of the game is Forest of Giant Plants, which Acro Bike can help accomplish. Battle Compressor doesn’t directly obtain Forest of Giant Plants, but it does thin your deck which makes cards easier to draw into. It is quite a tough call as to which one is the better choice.

Going into St. Louis, I would have agreed with Dave Richard, Dean Nezam, and Fred Hoban who all chose to play zero N in their Lurantis-GX / Vileplume list, but now that Item-lock is very popular, I definitely think running one or two copies of N is the way to go because it allows you to draw cards while being Item locked. However, one could argue that the game is already at a point of no return if the opponent goes first and gets Vileplume out.