As of publication, we’ve finished yet another Regional Championship in Collinsville, IL! At over 710 entrants, it totals as the largest Regionals in the game’s history, and I’m sure it was as fun to play in as it was to watch for everyone in the community.

However, while I’m sure all the excitement is still buzzing around the new card interactions in Expanded, there’s still a lot of work to be done with Standard in the post-Sun and Moon world. The last time we really visited this format in earnest, Pokemon.com had released all Top 8 lists, Drew Kennett’s breakout Solgaleo-GX / Lurantis-GX contraption became public knowledge, and my Decidueye-GX / Vileplume monstrosity was revealed. On top of that, we have some key developments out of Expanded to consider before setting foot in any International, Regional, or Special Event.

For those reasons, we will be going over a few simple but crucial topics to help prepare you for the upcoming Standard Regionals, as well as the International Championships in Melbourne. First, we’ll briefly discuss Decidueye / Vileplume by itself, as well as take a peek at the two lists which took Standard and Expanded by surprise. Second, we’ll project Decidueye’s chances in the upcoming events, and also consider the strength of Yveltal. Third, we’ll look closely at the surprising impact an Expanded Regionals like Collinsville will ultimately have on Standard tournaments.  Finally, we’ll be looking at some old and new decks that might’ve fallen below the radar after Anaheim thanks to Collinsville hype.

My Collinsville Experience and Musings on Decidueye-GX / Vileplume

Before we go into the meat of today’s article, I have to address the elephant in the room… or I guess you could say the Rowlet in the Prizes. I had a really good run at Collinsville! Although it’s been a while since I’ve been on schedule, I’ve thoroughly documented my love for Decidueye-GX, my Standard performance, and my great interest in using it again for Expanded.

The list will be publicly available before the end of the week. However, I figured I’d give my friends here an early preview of my Expanded runner-up list.

Andrew Mahone wrote an incredible piece a few weeks ago discussing his take on the deck. As you can see, my list is somewhat different, involving a 2-2-2 Vileplume, some different Pokemon, more recovery, and a few more resources to make Decidueye a much more self-sufficient attacker. These calls paid off for me, netting a cool Top 16 finish in Anaheim, and ultimately my runner-up finish in Collinsville.

It’s also my understanding that a very similar list to my original also won the Standard Sheffield Regional Championship in the U.K. It’s already been made publicly available. Here it is.

I find a lot of the changes he made to my original list very interesting, the biggest of which being a copy of Lillie. As a first-turn Supporter, I think Lillie is great, and its value can’t be understated against a late game N to one card. However, it’s important to remember that mid game Lillie can be incredibly weak, netting you as few as one card under Item-lock. It’s also a flat-out less efficient choice than a third copy of Shaymin-EX because whereas Lillie uses your Supporter drop for the turn, Shaymin does not. This gives you a longer-term outlook at burning through your deck, more outs to Lysandre, and fewer chances at bricking. Even the Bench space issues created by playing all of your Shaymin-EX on a single turn can be mitigated with some smart, early Sky Return attacks. Ultimately I would still not run Lillie in Standard, especially because Standard has no reliable way to draw into Lillie turn one, but I can certainly see it being useful for the fellah who won. 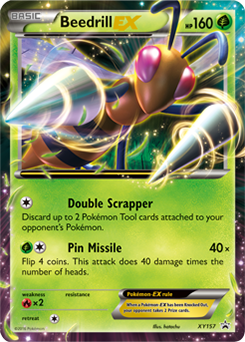 Beyond that, the winner’s other choices don’t surprise me that much. They’re all things I’ve considered and wanted to play at one point or another, and it appears he made the best calls for his metagame. Beedrill-EX in particular has the promise of being a surprisingly aggressively early-game attacker, and gives you yet another option to get lucky with coin flips beyond the pre-game setup!

As I’ll explain later on in the article, I’m not 100% sold on Decidueye-GX / Vileplume as being the best decision for upcoming Regionals. All the same, I expect Decidueye-GX to remain a good choice in almost any tournament until the end of the season, in any format. The plays are tough, the meta calls can be punishing, and the knowledge of your Prizes is crucial. Still, it produces perhaps the most terrifying lock in the entire game, dealing constant, free damage under an Item-lock. The recently revealed Tapu Lele-GX will also be a boon to Decideueye, not only as a potent secondary attacker, but as reliable consistency. Furthermore, there at first blush appears to be no new major threat to Decidueye in the upcoming expansion. Therefore, your ultimate threat remains to be Garbodor, which could just be addressed with a Beedrill-EX or Meowth from Fates Collide.

How Popular Will Decidueye Be?

I don’t think Decidueye-GX will take on very well with the American crowd traveling to Australia, but I do think the Europeans and perhaps even the Australian home base will embrace its play. Call it more a gut feeling than anything, but the initial reaction to a Vileplume deck doing well in Anaheim was not pretty, and so based on recent community trends, I’m more inclined to believe that people would prefer to tech against that matchup rather than actually play with the deck itself.

Beyond specific American players who fear Vileplume for its inconsistency or inflexibility, I believe that Decidueye’s overall user base is capped, most likely resulting in less popularity. That’s mainly because Decidueye is a nuanced deck that’s tough to grasp, and it’s doubtful such a deck will become popular. A perfect example from this season prior to Decidueye would be Dylan Bryan’s runner-up Vespiquen list from Georgia. This thing was super good, but it had so many strangely precise choices, there was just no way it would be embraced by the general populace. Meanwhile, Andrew Mahone’s equally good, but much more streamlined Vespiquen / Zoroark / Marowak list is primed for net decking. Its lines are uniform, the deck itself is consistent, and the “paths” you have to take with your plays are mostly linear.

In Decidueye / Vileplume’s case, it’s not so much the list that’s nuanced, but the plays. Whereas other past and future Decidueye variants may be much more forgiving, a misplaced Feather Arrow when running a Vileplume list will destroy you. Now multiply that 200 times over a long weekend, and it should be clear why relatively few people in the normal playing population would want to bother with Decidueye.

The past half-decade of Pokemon cards has been defined by fast, Basic-oriented decks, so players are still allergic to the thought of two Stage 2 Pokemon in the same 60 cards. Only with constant, relentless victories and top finishes will Decidueye-GX / Vileplume finally be recognized as a top deck; otherwise, people will defer to whatever evolves the least. Basic or Stage 1-based decks, when everything else is equal, are more space-efficient and faster, so this tendency of good players should make sense. It goes all the way back to the original Base Set days, when fast Basics were paired with lots of draw and disruption cards.

Not scared off by le bird? Up for the challenge? Good, because I fully expect a few people to do really well with this at Melbourne, even if I do expect many, many more to do poorly. If you are going to one of the upcoming major tournaments and are ready for the challenges associated with this deck, then I support you 100% — the rewards you can reap from it are plenty! However, I understand that a lot of my in-play decisions with Decidueye-GX made zero sense to viewers. That’s okay, because I can elaborate on the finer points of playing the deck here.