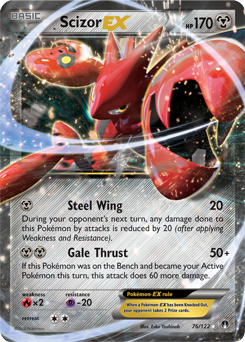 As with the Kingdra-EX Box in March, a new Scizor-EX Box will be released on April 21st.

Each box will come with a foil Scizor-EX, a jumbo Scizor-EX, four booster packs, and a PTCGO code card.

We still don’t know why TPCi is releasing these Pokemon boxes with old EX cards, especially when the TCG’s new Sun & Moon era focuses on Pokemon-GX. The product descriptions do not say these are promo cards with alternate artwork either — they’re just straight-up reprints.

Perhaps there is a huge demand for Pokemon TCG products right now and TPCi is just pumping out whatever they can, but that’s just speculation. As I tweeted the other day, a bunch of people, including myself, saw that stores stocking Pokemon TCG product were completely empty after Christmas — which is quite unusual. Since the Sun & Moon era is still brand new, TPCi does not have a lot of “collectable, big” cards they can market (like Pokemon-GX). Pokemon-EX have been out for five years and they feature dozens of different Pokemon, so maybe they’re using Pokemon-EX to instead meet the demand?

There’s also a possibility Pokemon GO will feature all the Gold & Silver Pokemon by March or April — Kingdra and Scizor are of course from Generation II. We saw TPCi throw together the Articuno / Zapdos / Moltres-EX decks featuring old, old Team Plasma cards when Pokemon GO started to take off, so maybe they’re playing to that market again. Casual fans who don’t play the TCG just want cards of their favorite Pokemon and don’t care if they’re old, new, playable, or unplayable.