What an exciting time to play Pokemon right now. A new rotation has just happened and people are more driven to play this game with the promise of more cash prizes. This is always an exciting time of year because of the new decks and the meta that reveals itself with the rotation of popular cards in the past.

This new format brings about huge changes. The masters of the old format, Night March and Trevenant have disappeared, and everyone is scrambling to find their footing with the new cards that have become better with the rotation of these two decks. These two decks in particular limited creativity in the game and the cards that these decks just dominated are now the new meta. How much hype is M Mewtwo-EX and M Rayquaza-EX now that Night March doesn’t just sweep these decks away?

Myself and a lot of our writers are already covering much about this new format. There’s a lot of ideas that are being discussed about this new format amongst myself and the other writers. Most of us, including myself have already tested a lot of this format in preparation for the PokeBeach Invitational that took place after the World Championships this year.

I’m going to discuss a bit about breaking ground on a new format, and then I will discuss the meat of this article, Yanmega and various Stage 1s that work well with it. I’ve been testing these decks extensively and they have tested incredibly well against the decks that should be popular after rotation. I’ll break down some decent decks for the PRC – STS format while leaving the in depth stuff about those particular decks to our other writers.

I see it every year. People just don’t know what to do after rotation. Not necessarily everyone doesn’t know what to do, but a good majority of players out there just do not. Consistency engines disappear and people don’t know how to build a deck after looking at and using decks all year and not constructing their own.

The Skill of Deck Building

Now, the content and lists that our writers have put out are meant to be used by our content subscribers. But I believe that there is value in the skill of good deck building. Seriously, see a good Pokemon that you like, build a deck, play a few games, and drop that list in our Subscriber’s Secret Hideout for some criticism. I love seeing budding players build their own decks. I feel like this is a skill that comes in very handy this time of year, and it’s also more helpful to others since you can critique your buddies’ decks too.

You can also see lists that we put out, and tool them up to fit what you personally prefer better. Your deck list is a huge portion of tournament success. It also gives you an edge over other players in your area competing against you, since they may build very inconsistent or clunky versions of decks.

So don’t hesitate to use what’s successful, but try to build your own decks based on ideas that you have. You may be the next Shintaro Ito, piloting a well built rogue to a win.

Once a format rotates, a lot of ideas that you may have shoved into the back of your brain need to come back and be re-evaluated. Cards and the decks that go around them are in a different metagame now. So for example, decks such as Primal Kyogre-EX got destroyed by rush down decks such as Night March and Vespiquen. These decks are practically non-existent now, due to Battle Compressor rotating. So Primal Kyogre-EX may be a deck worth considering again.

What else needs to be considered is that certain consistency cards are gone now. Battle Compressor was a staple in a lot of decks, and it’s gone now. So rethinking counts of Supporters is a must. Higher counts of Professor Sycamore, N, and Trainers' Mail need to be able to make up for the lack of the Battle Compressor and VS Seeker combos. Also, utility Supporters such as Hex Maniac and Lysandre, Supporters that do not draw you any cards, need to have their counts rethought. One Lysandre was fine before, when you could Battle Compressor it away and have easy access to it with VS Seeker. But now you must draw into them, so maybe two is worth playing, depending on your deck. 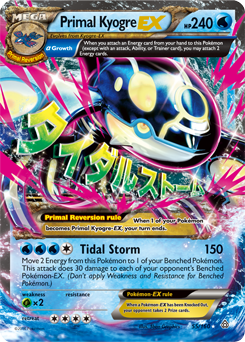 A key part of whether or not your new deck is viable or not depends on what you feel like will be good after the rotation. I think that it didn’t take a genius to figure out that Sky Field decks would be popular, so we may play decks that can abuse or fit two copies of Parallel City in their decks to help counter these decks. This information can be just pure speculation on your part, what your buddies are testing, or what you read on PokeBeach that our writers feel will be popular and that you need to consider. Essentially, you need to identify a new metagame before a large tournament establishes it. This alone can give you an incredibly good shot at doing well at your next tournament, since you can predict what everyone else is playing, and have answers to it in your deck.

Let’s consider what I feel the metagame will be. This will make it much clearer why I made the choices I made in my deck lists.

The Top Decks of the Early New Standard Format

Mega Pokemon are the easy solution to turn to when considering decks for this format. They all have massive HP and have amazing attacks. Defining a tier list for this format isn’t easy, since there is no actual hard data to go off of. I will organize this list in tier list fashion, starting with Tier 1.