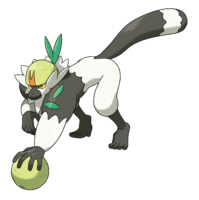 Passimian live in troops of 20 to 30 individuals, all following a leader. This leader will take 10 of the individuals in the best condition to search for food. The troop’s teamwork is strong, and the boss of each troop decides what mark members will wear on their arms to distinguish the troops.

The boss puts the troop members through training to improve their coordination with one another and their skill in handling Berries. Apparently this training is so hard that some Passimian end up running away.

Lobbing Berries at foes is how Passimian attack. They sometimes work in coordination with others, passing Berries back and forth to bewilder their opponents. Passimian don’t just pitch hard Berries at opponents, either—they also have a technique that uses soft Berries to obscure their opponent’s ability to see.

Passimian wants its Trainer to have the qualities of a leader as well. It watches a Trainer’s form closely when he or she throws Poke Balls, and will not listen to the orders of a Trainer with poor form.

Passimian has a new Ability, Receiver, which no other Pokemon has previously had. With the Receiver Ability, this Pokemon can inherit the Ability of an ally who faints in battle. 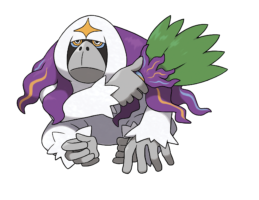 Oranguru live solitary lives deep in the forests and do not usually take much action. Instead, they position themselves high up in the trees to meditate. Long ago, people thought that Oranguru were humans who dwelled in the forest depths, so they called them “the people of the forests.” Oranguru is kind to the other Pokemon living in the forest, providing medicine for injured Pokemon and food for the hungry.

Oranguru sometimes act on their own initiative and will use items that only humans normally use. From a Trainer’s perspective, they can be hard Pokemon to handle at times. Allegedly, there have been sightings of Oranguru using Poke Balls!

The fan-like objects held by Oranguru are handmade by the Oranguru themselves. These fans appear to be made of layers of leaves bound together with Oranguru’s own fur.

Instruct is a move that only Oranguru can learn. It can make the selected target use its most recent move again immediately. 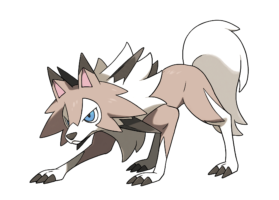 When Rockruff is bathed in profuse amounts of solar energy, it evolves into its Midday Form. In the world of Pokemon Sun, Solgaleo’s influence causes Rockruff to evolve into this form.

Lycanroc lives solo in mountains and deserts, not creating a pack. Each has its own territory, and they live without interfering with one another, which helps to avoid unnecessary fights.

Lycanroc obeys its Trainer’s orders dutifully. In particular, if a Trainer accepted it during its more rebellious pre-Evolution period, Lycanroc will never ever betray that Trainer and will be the most loyal of partners.

The Midday Form Lycanroc is known for speedy movements that leave its opponents bewildered. It dodges opponents’ strikes while attacking with the sharp rocks of its mane as it slips right past them.

Accelerock is a move that only Midday Form Lycanroc can learn. It slams into an opponent with quick moves. This move is guaranteed to strike first! 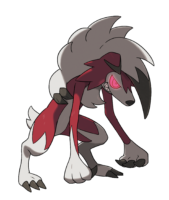 When Rockruff is bathed in an abundance of lunar energy, it evolves into its Midnight Form. In the world of Pokemon Moon, Lunala’s influence causes Rockruff to evolve into this form.

Midnight Form Lycanroc provokes its opponents by pressing in hard and inviting their attack. When an opponent falls for this tactic and attacks, Lycanroc counters with its forte: a single devastating blow that finishes off its foe! The stronger its opponent is, the more excited for battle Lycanroc becomes. It doesn’t mind getting hurt if it means victory in battle. Battles thrill it so much that its eyes glow.

Contempt rises in this Pokemon for Trainers who give orders it doesn’t agree with or who try to force it to battle. On the other hand, it will feel a deep trust in a Trainer who can truly draw forth its power in battle.

Counter is a move that Rockruff can learn when it evolves into Midnight Form Lycanroc. When Lycanroc takes physical damage from an opponent, it deals double that damage back to the same opponent.

Alola Fashions: In Pokemon Sun and Pokemon Moon, you can change things like your character’s clothing, hairstyle, and even eye color (thanks to colored contact lenses). Adventure through Alola while showing your own flair for fashion! (You can even remove your hat!)

Colorful Clothing: You can change the look of your clothing with colorful dyes! Perhaps there’s a design you like, but you’d prefer it in a different color. Now that wish can come true! 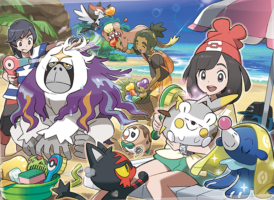 Use the Pokemon Refresh feature to care for your Pokemon. After a battle, Pokemon sometimes end up all dirty. When that happens, you can take care of them and get them all cleaned up. By caring for your Pokemon, you can also cure status conditions like poisoning and paralysis that were inflicted on your Pokemon in battle.

Pokemon that have grown very affectionate, thanks to petting them a lot and feeding them their beloved Poke Beans, will battle to the utmost for you. Sometimes they’ll avoid attacks from opposing Pokemon—and even hold out when they’re on the verge of fainting. Take good care of your Pokemon with Pokemon Refresh, and they’ll be great allies on your adventure!

In Pokemon Sun and Pokemon Moon, Z-Moves make their debut. Each Trainer can use just one of these powered-up Z-Moves per battle. Z-Moves exist for moves of every different type. But some Z-Moves are exclusive and can be used only by certain Pokemon, such as Snorlax and Alolan Raichu. Now, Pikachu and Eevee join the list of Pokemon able to use exclusive Z-Moves. Both of their Z-Moves are extremely powerful. Bring Pikachu and Eevee to your battles and see what these high-powered Pokemon can do!

Catastropika: Pikachu’s exclusive Z-Move, Catastropika, is a superpowered attack move where Pikachu borrows its Trainer’s strength, wrapping itself in extra-high-voltage electric power, and charging into its opponent. This will become Pikachu’s most powerful attack! 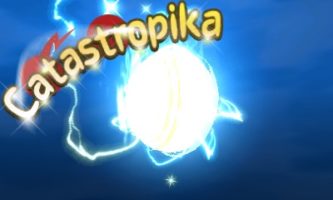 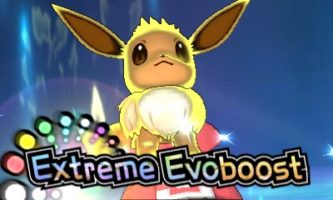 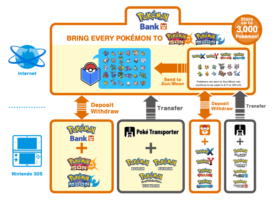 In January 2017, the Nintendo 3DS downloadable software Pokemon Bank is expected to receive an update for compatibility with Pokemon Sun and Pokemon Moon. Pokemon Bank is an application that enables you to put Pokemon you’ve collected in your games into Internet-based storage boxes. Until now this service has been available for Pokemon Omega Ruby, Pokemon Alpha Sapphire, Pokemon X, and Pokemon Y. Starting in early 2017, it will support Pokemon Sun and Pokemon Moon as well.

You can’t deposit Pokemon holding items into Pokemon Bank. If you try to deposit a Pokemon with a held item, that item will be sent back to the original game.

Poke Transporter is also being updated for compatibility with the Virtual Console versions of Pokemon Red, Pokemon Blue, and Pokemon Yellow: Special Pikachu Edition. Deposit the Pokemon you’ve collected into Pokemon Bank, and you can send them to Pokemon Sun and Pokemon Moon as well. 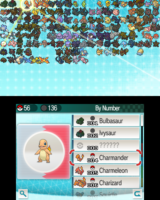 A new National Pokedex feature is coming to help you check out the particulars of the Pokemon you’ve deposited! When Pokemon Bank is updated to support Pokemon Sun and Pokemon Moon, it will also gain a new Pokedex feature. The application will read your saved data from any games* you connect with it, collecting information about Pokemon you’ve caught, so you can check it. Using the Pokedex feature in Pokemon Bank, you’ll be able to see this information—even about Pokemon that don’t appear in the Alola region of Pokemon Sun and Pokemon Moon.

The official Japanese Pokemon Sun and Pokemon Moon website has been updated to announced that the next information dump will be on October 4, 2016 at the usual time.