Additional updates to the official Pokemon Card website have been revealed a few new cards, including a remake of Base Set‘s Koffing for the upcoming CP6 20th Anniversary Set. Compare its translation to the original English card to see the difference! Base Set Koffing was a Grass-type card, but starting with the Diamond & Pearl set, Poison-type Pokemon switched to being designated as Psychic-type cards. Thanks to Vincent H. For the translation!

We also have clear, individual images of all the Gym Badge promo cards that were previously announced. These promos will be available to players who compete in Japan’s upcoming 20th Anniversary Festa events this October. 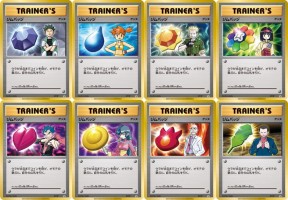 Flip a coin until you get tails. For each heads, draw 1 card.