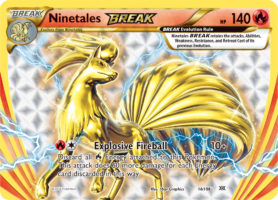 The release of this set will be different than previous releases. Evolutions will be available for purchase early at participating U.S. and Canadian Toys R Us stores on October 30th, then at Gamestop on October 31st, then at other retailers such as Target and Walmart by November 2nd. Presumably TPCi has a deal with said stores to release the cards early.

The Japanese version of this set, named 20th Anniversary Set, was released last Friday. Our English set will contain the cards from that set, plus Japanese promos like Slowbro-EX and M Slowbro-EX (which are also listed in that news story).

As posted earlier, the English card templates differ from the originals in a few obvious ways: 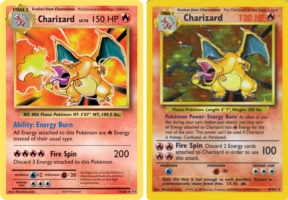 This will be our last XY set. Sun & Moon will be released in America next February.

Fun fact: to date, 21.5 billion Pokemon cards have been shipped to 74 countries around the world. Poor trees!