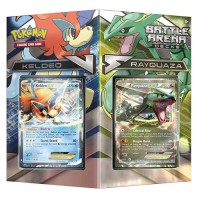 As previously reported, the new Battle Arena Deck featuring Keldeo and Rayquaza will be released on September 21st. The package contains two 60-card decks focusing on Rayquaza-EX and Keldeo-EX. We now have a product image of the deck that confirms that the Keldeo-EX is from Boundaries Crossed and Rayquaza-EX is from Dragons Exalted.