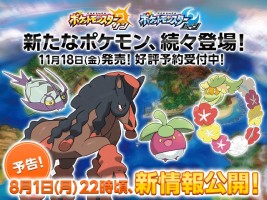 The official Japanese Pokemon Sun and Moon website has announced that new information will be revealed on Monday, August 1st! The news will be released at 10 PM JST / 6 AM US Pacific Time, which is the same time as previous reveals.

We’ll probably also get new Sun and Moon news at Worlds. August will be a big month!

As a reminder, the games will be released in Japan and the United States on Friday, November 18th and in Europe on Wednesday, November 23rd.

What news do you think will be revealed? Let us know in the comments!