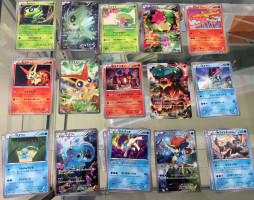 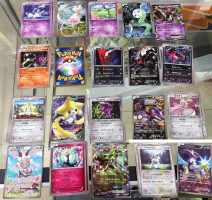 We now have exclusive photos of most of the cards from CP5 Mythical / Legendary Dream Holo Collection, which will release in Japan this Saturday. Not pictured above are Zygarde-EX (which comes after Zygarde) and Latios-EX (which comes before Rayquaza-EX).

As expected, all the full art promos from our Mythical Pokemon Collections are in this set, including regular art versions. The rest of the cards are American promos that had not been released in Japan yet, as mentioned in previous stories.

Our source tells us they think Magearna’s regular art card did not have a Pokedex number on it, but they won’t be able to check the card again until later today. This story will be updated later once we know. Update: The Pokedex number is blank.

Only Victini, Keldeo, and Meloetta were unrevealed at this point. We’ll have Meloetta’s complete spoiler later today.

[C] Energy Assist: Flip a coin. If heads, attach a Basic Energy card from your discard pile to 1 of your Benched Pokemon.

Ability: Justified
Each of this Pokemon’s attacks does 50 more damage to [D] Pokemon (before applying Weakness and Resistance).

[W][W][W] Sacred Sword: 100 damage. This Pokemon can’t use Sacred Sword during your next turn.