Hello again everyone! We’re at a busy time of the year for the Pokemon community here in the North America as the U.S. and Canadian National Tournaments are only weeks away. We’ve also received a lot of news over the course of the last couple of weeks about stipends, Steam Siege being legal for Worlds this year and brand new cards that have been revealed from the upcoming set. However, the main focus for many players, myself included, is on Nationals. Personally, I’m really excited about Nationals this year since it’s in my home state of Ohio and the prize structure has been completely changed this year. First place now receives $10,000, which is a dramatic increase from previous years and should promote an extremely competitive atmosphere this year.

As a result, I’ve decided to take a step back and give out some advice on how to excel at large tournaments like Nationals by what you do before and during the tournament rather than what deck you decide to play. No matter how good your decklist is or how confident you are in your matchups there are what I call the “behind the scenes” players that can factor into the outcome of your entire day. Time management, mental preparedness, and playing the field are just a few of the topics I’ll be dissecting for you that can help or hinder your overall performance throughout the day. Many times your entire day can come down to not what deck you play but how you react to certain situations and how prepared you are for the tournament as a whole.

Pokemon is a lot like a strategy game because you have to think several steps ahead of your opponent to come out on top. There is a mental aspect to Pokemon that can drain you physically as well as mentally. By taking the proper steps to prepare your body and mind for a long day of competitive Pokemon, you will see an increase in your level of play, which will lead to a more substantial run for the ultimate prize of National Champion.

Be sure to stick around at the end of the article for a look at my top choice right now for Nationals as well! Without further adieu, let’s jump right in!

I know I said that being confident in matchups and your decklist will only get you so far throughout an event, but they are admittedly two of the most important factors going into any tournament. If you play a deck that struggles against the meta, then you’re going to struggle to win throughout the day. That’s why it’s crucial that you know your meta before you walk into the event. If you know what you’re going into, you can more effectively prepare for the event, which will give you an edge in the long run.

The meta this year is looking to be a mix of Trevenant, Greninja, and Night March with some fringe decks such as Seismitoad-EX / Friends (WaterBox), Wailord-EX, and Vespiquen variants. While not a complete breakdown of what I’d expect to see at the event, I think the primary focus of testing for many people should be against the main three decks of Trevenant, Greninja, and Night March. Those will most likely be the most prominent decks to watch out for during Nationals this year. As a result, I would choose something that can beat at least two out of the three threats while still having solid matchups against some of the more fringe decks mentioned earlier. 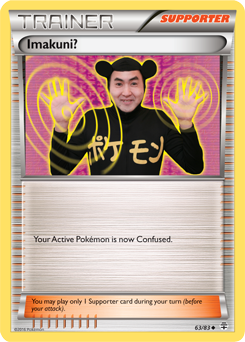 Figure out which decks you think will be the most potent plays for the tournament and experiment with them. Deckbuilding is a crucial component of the Pokemon TCG and playtesting is an important part of the deck building process. Get with a group of friends and build the decks you think will be popular during the event and play around with all of them against different matchups. If you have an idea for a deck you think can succeed, don’t be afraid to try it out against established archetypes to see how it holds up. Not only will you see if a deck can contend with already tried and true decks in the format, you’ll also gain an understanding of how to play against specific matchups. By playing with established decks, even if you don’t intend on playing them, you’ll know at the very least how another player would play the deck and what their goals are so you can counter them or play around them during a match. Knowing how a deck operates and how it goes about obtaining its goals will give you an edge whenever you encounter those decks later on.

If you cannot afford to build multiple decks for whatever reason, consider using resources such as the Pokemon Trading Card Game Online. These are also useful for the testing process and will yield similar results as playtesting in person. However, I would recommend playing in person because you can constantly question and reverse your plays as you figure out how to play a certain deck. For example, if while in a game you play two Puzzle of Time you can think for a bit longer about what you want to take from your discard or change your mind at any point since you aren’t in a sanctioned match. This helps a lot to teach you what the optimal plays in certain situations are and makes it easier for you to make those same decisions during an actual tournament. However you choose to go about playtesting doesn’t matter as long as you understand your deck, the other decks in the field, and how to overcome obstacles well in advance of the tournament.

The other advantage of taking time to playtest is that it allows you to try out different techs and variations of decks. Experimentation is how great decks are made and how consistent, versatile lists are created. Don’t be afraid to try out cards that aren’t common in most decks. While most of the time they don’t work out as well as you’d want, sometimes you find that one card that makes a huge difference for a certain matchup.

Remember also that you’re going to be playing a lot of Pokemon at large events, so pick something that you won’t feel exhausted playing for a full ten rounds. Some decks, especially lock decks, can be draining to play over time since most of the matches are longer and get drawn out more. If you do choose to play a deck like this, get ready to be playing for a long time. I’ve found that at big events you should stick with your gut and play a deck that you are comfortable and confident with playing. It makes the long day seem a bit shorter and helps you get through it without wanting to tear your hair out.

This may seem like an obvious assessment, but for large tournaments such as Nationals or even Regionals, being well rested is extremely important. The tournament starts early in the morning and won’t let out until late into the evening meaning you’ll be up and about for at least 12 hours before you’ll be able to sleep again. Nationals is a marathon, not a sprint. Conserving energy is going to be beneficial in the long run because it will help keep you on your toes throughout the day and keep you from making obvious mistakes that you might otherwise make. It’s a lot easier to fall into simple pitfalls when you’re tired such as forgetting to search your deck completely and misplaying at crucial points in a match.

It could also be beneficial to take some time to get out of the convention center for a few minutes to recharge and stretch your legs. Take advantage of lunch breaks and eat something to keep you going. I know a lot of people stay up late getting in that last bit of playtesting or making those last minute changes to your deck, but set aside time to sleep, and wake up early enough to get down to the tournament area on time.