The powerful Swoop! Teleporter card from EX Team Rocket Returns has returned to the TCG as a new Supporter card called Ninja Boy! Ninja Boy is a Trainer class that was introduced in Generation III. Thanks goes to Sean T. for the translation! 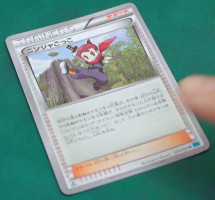 Search your deck for a Basic Pokemon and switch it with 1 of your Basic Pokemon in play. (Any cards attached to that Pokemon, damage counters, Special Conditions, and effects on it are now on the new Pokemon.) Shuffle the first Basic Pokemon into your deck.

You may play only 1 Supporter card per turn (before your attack).

As with Swoop! Teleporter, this card is useful because it allows you to share resources between two different Pokemon. You can evolve the new Basic Pokemon right away if the previous one was in play the turn before (since the new one has been in play for as long as the previous Pokemon), retain the same Energy as the first Pokemon, etc. It saves you time and Energy with the new Basic Pokemon you want to use.

In the past, the card was popular in Medicham ex decks: you would start on your first turn with your setup Pokemon Jirachi, attach an Energy, and use its Poke-Power. Then on your next turn you’d replace Jirachi with Meditite, evolve into Medicham ex right away (since it’s been in play for as long as Jirachi), attach a second Energy to Meditite ex, and then boom – a fully powered-up Active Pokemon that came out of nowhere! So you’d get to use your setup Pokemon and then use its resources to power up your intended Active Pokemon right away.