Talonflame was just revealed at Japan’s Blastoise Mega Battle tournaments. It’ll be in Japan’s XY11 set, Explosive Fighter and Cruel Traitor. Thanks goes to Jake C. and Vincent for the translation! 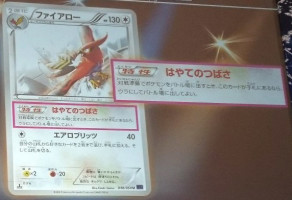 Ability: Gale Wings
At the start of the game, you may put this Pokemon face-down as your Active Pokemon.

[C] Aero Blitz: 40 damage. Search your deck for any 2 cards and put them into your hand. Shuffle your deck afterwards.

So if you’re lucky enough to have Talonflame in your hand at the start of the game (a 39.95% chance if you include four), you can play it as if it were a Basic Pokemon. No need for its pre-evolutions. Then you can setup for one Energy and retreat for free when you’re done.

There are several downsides to using Talonflame, but I’ll let you guys discuss them in the comments. (Such as having to include four, what happens if you don’t get one of them in your opening hand, and is the card even useful after that point if you’ve dedicated valuable deck space to it, its pre-evolutions, getting a Talonflame up and running, and attacking with it. Costs and benefits! Probability! Math!)

*flashbacks to having nightmares before high school math exams*