Hello once again PokeBeach readers! It has been a while since my last article, but I’m back at it trying to prepare you for Spring Regionals! I’ve been on a bit of a hiatus simply due to school. I’ve had quite a few projects to finish up here toward the end of the school year as well as organizing a bassoon recital to showcase the work I’ve done over the course of my first two semesters in graduate school. On top of that, I’ve maintained a busy performance schedule with concerts here in Cleveland as well as with orchestras in Sandusky and Ann Arbor. Taking care of all that has made it difficult for me to fit in Pokemon! However, I am so pleased to share that I recently wrapped up my Worlds invitation. I was able to attend a couple League Challenges to put the finishing touches on my season. I’ll likely head into Worlds with my current total of 307 points. I think I am the biggest advocate of TPCi’s adjustment of the Worlds qualifying point total change from 500 to 300. As a college student, it just wasn’t feasible for me to attend a high enough amount of tournaments to reasonably garner 500 points. I didn’t perform particularly poorly at any one event and the 300 point barrier really rewards consistent play while stipend money and paid trips reward those who are able to attend and have strong showings at a large number of events.

In any case, I wanted to run over two decks I played in Expanded League Challenges. I also wanted to give you a full run down of the PokeBeach tournament that our writers and editors participated in. We used this tournament to help us prepare for Spring Regionals as well as to give our readers an look at what could do well this weekend!

To start, let’s take a look at the list I used at an Expanded League Challenge this past weekend!

This list is very straightforward without a lot of frills, which is exactly the way I wanted it. There are a plethora of attackers, and important cards like Dark Patch, Max Elixir, and Fighting Fury Belt are played as four-ofs. In past articles, I’ve written about identifying the goal of a deck and streamlining your card choices to maximize that goal. I feel like this list is a perfect example of that concept.

The main goal of this deck is to get a Darkrai-EX up attacking as quickly and efficiently as possible. It is necessary then to not only get Energy on Darkrai-EX, but also to ensure that his first attack, Dark Pulse, hits for enough damage. Since you are likely to 2HKO most Pokemon-EX in the early game, I’ve maxed out counts of Fighting Fury Belt to guarantee that your attackers survive as long as possible. With a Fury Belt attached, Darkrai-EX can usually withstand at least two or more attacks.

With the above list, I ended up going 3-2 with losses to Vespiquen / Flareon and a Trevenant deck that played Weakness Policy! I felt fine about every round I played, but the deck sputtered in my two losses. I was a bit taken aback by the Trevenant decks inclusion of Weakness Policy as it messed with my math, but I felt that I could have beaten it if I played a bit more aggressively during my first turn.

I beat two Raikou / Eelektrik decks, and an Yveltal-EX / Gallade deck. I feel the deck is solid and warrants a look for Spring Regionals simply because it is quite consistent. I enjoyed playing a deck with so many four-ofs and I always had a hand that was highly playable. I definitely want to fit in more Lysandre and a Hex Maniac, but doing so might come at the expense of Energy. 10 Darkness and two Double Colorless were the perfect number of Energy as I rarely missed finding them off Max Elixir. In all, I think Turbo Darkrai is a strong contender for Spring Regionals. 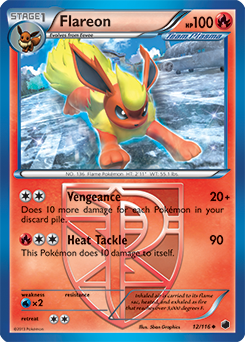 The primary reason I played this deck was because it won the first League Challenge. There’s a lot to like about Vespiquen / Flareon – it hits for high damage, it attacks with non-EX Pokemon, and it is generally consistent. I wasn’t as interested in playing it in the first LC because I figured there could be people running Archeops which I didn’t really want to deal with. I also knew Trevenant would be a terrible matchup and figured that enough people would run Trevenant to make Vespiquen a poor choice. It ended up that the metagame was full of people trying out random decks with cards from BREAKpoint. There were no people playing Archeops, and one person who played Trevenant so I figured Vespiquen would be worth running.

I ended up going 4-1 with this list, losing only to the single Trevenant player in the room. I felt comfortable with the choice of deck, but the metagame wasn’t the ideal testing scenario as I played one modified theme deck and a subpar Darkrai-EX / Yveltal-EX list.

I will be attending Canada’s Regionals and I couldn’t be more excited! I will be unable to make it to U.S. Nationals this year due to my participation in a summer classical music festival, so Canada will be my last tournament before Worlds! I’m looking forward to hanging with my MSU friends once again playing some Pokemon and winding down from a fulfilling yet busy school year.

I want to take the rest of this article to break down the PokeBeach Expanded Tournament. This tournament was held these last couple of weeks to prepare both our PokeBeach staff and our readers for Spring Regionals. I’ll give you the decklists our writers and editors used in the tournament, as well as provide insight into the various matchups they played, cards they wish they included, and in-game strategies. I’ll highlight only the matchups I think will be the most interesting and helpful to you as a reader. I’ll then make some final predictions about what I think will see play this upcoming weekend. Ready? Let’s go!