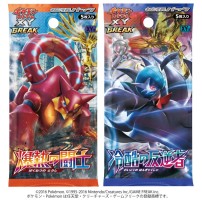 As some of our members pointed out in my last story, Cruel Traitor features Magearna on the pack art. This means the set will be the first ever to feature a new Pokemon ahead of its generation. (Other Pokemon released ahead of their generation have always been promo cards with owners in their names, like “Aura’s Lucario ex”).

Since Volcanion is an unusual type combination, the Tweet wonders what type Volcanion will be: “On June 17th (Saturday), the expansion pack Explosive Fighter and Cruel Traitor will be released. Explosive Fighter has Volcanion. In the games this Pokemon has a Fire/Water dual type, but what type will it appear as on the card!?” Thanks goes to Bangiras for the translation!