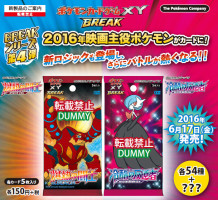 Japan’s eleventh XY set will be released on June 17th and will be split into two subsets — Explosive Fighter featuring Volcanion and Cruel Traitor featuring shiny Mega Gardevoir! Each set will feature 54 cards for a total of 108 cards (excluding secret rares). This will be the fourth BREAK set.

Like most summer sets, XY11 is meant to advertise the latest Pokemon film. Both of the set’s featured Pokemon will appear in the 19th Pokemon movie, Volcanion and the Mechanical Magearna, which will debut in Japanese theaters on July 16th.

The product listing confirms other Pokemon from the movie will appear in the set as well. So far, Pokemon confirmed for the movie are Magearna, Volcanion, shiny Mega Gardevoir, Slurpuff, Mega Salamence, Mega Glalie, Mega Steelix, Mega Alakazam, Mega Houndoom, Mega Tyranitar, shiny Mega Gengar, Mega Swampert, Mega Sableye, Mega Banette, and Mega Beedrill. Magearna is from the seventh generation, so it definitely won’t be in the set. Previous Mega Evolutions will likely be absent from the set as well (though Mega Gardevoir is already breaking that rule, so who knows?).

The product listing mentions a new type of mechanic will debut in XY11. The last time the same wording was used, we got Ancient Traits. The movie has a heavy emphasis on Mega Evolutions, so it might have something to do with that.

Pokemon Sun and Pokemon Moon are coming out at the end of 2016, so this will either be the last XY set or the penultimate one. In my opinion, we’ll likely have an XY12 set in the fall ahead of the new games, and then the first Sun and Moon set will debut at the top of 2017. Yes, we’re only in March, but we can already predict out to 2017.

But XY11 isn’t the only news tonight! 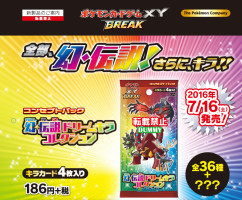 To celebrate the release of the Volcanion movie, a new mini-set named Mythical / Legendary Dream Holo Collection will be released on July 16th! The set will feature 36 cards, excluding secret rares, and all of the Pokemon will either be Mythical or Legendary Pokemon!

This mini-set is yet another Pokekyun Collection and Shiny Collection set in that all of the cards will be holo. Each booster pack will only come with four cards as opposed to five for regular sets. The booster pack confirms Xerneas, Yveltal, Zygarde, and Volcanion will be in the mini-set.

And as usual, we’ll get sleeves and deck boxes for the new set. In this case, they’ll feature Volcanion and shiny Mega Gardevoir.

Thanks goes to our longtime translator Bangiras for all of the translations!

Pokemon is absolutely wrecking our wallets this year. 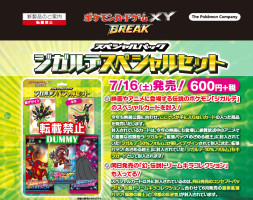 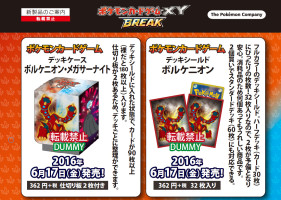