Welcome back, Beachers! How is everyone? I’m doing well, and I hope you all are too! Spring is upon us, and so are this year’s State Championships! With the National and World Championships only a few months away, we’re going full speed into the spring tournaments. Today we will be looking at one of the new decks to come out of BREAKpoint (Trevenant) as well as go over my Winter Regionals experience in St. Louis.

I didn’t have much time to playtest for St. Louis outside of a single League Challenge in my hometown, so most of my decision-making had to come through what I heard and what little time I had for testing. After a sub-par performance in St. Louis, it’s safe to say that I’ve invested a great deal of time into preparing for this year’s State Championships, as I will be attending three of them in a four-week span. Anyway, let’s talk St. Louis Regionals first.

Simply put, Expanded and I don’t get along. This really stinks for me, because Regionals are nothing but Expanded. I love Standard, where we don’t have to deal with the likes of Sableye, Ghetsis, Accelgor or N, at least for now. In Expanded, all of the above cards irritate me in one way or another, with Ghetsis likely being the worst offender. Expanded also tends to include a much larger number of control decks in general, from Seismitoad-EX builds to anything running Silent Lab or the silly Sableye / Garbodor deck. With my usual deck choice – Night March – performing a bit under par in Expanded, I was forced to get a bit creative. I planned to play Night March with Archeops, Gallade, and Maxie's Hidden Ball Trick originally, but ended up switching decks a few weeks before St. Louis Regionals after testing a Rayquaza-EX / Eelektrik variant that one of our local players was running. In testing, this deck performed extremely well across the board. I eventually ended up choosing Rayquaza-EX / Eelektrik for St. Louis, although it didn’t perform nearly as well there as it had been when I was testing. Let’s take a look at the list, shall we? 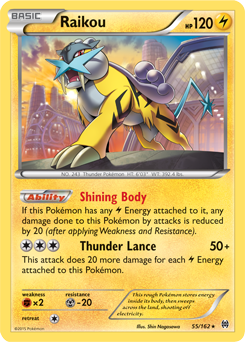 Just one week before St. Louis, a pair of decks running Raikou and Eelektrik made it to day two at the Virginia Regional Championship. These decks were similar to the build I had been playing, although they had dropped Rayquaza-EX completely and were running four copies of Raikou as attackers instead.

I opted to maintain two copies of Rayquaza-EX as homerun-hitters, capable of OHKO’ing anything in the game with enough Energy, which is something Raikou takes a bit longer to do. In the process, however, I failed to consider that Donphan was still running around in Expanded, figuring that it wouldn’t see very much play. Of course, after tying with an Yveltal-EX / Archeops deck in the second round, I got paired up against a Donphan player in round three. Thanks to a bit of luck on my end, I was able to escape the match with another draw and a record of 1-0-2, but I knew it was all uphill from there.

The following round presented me with another Yveltal-EX / Archeops deck, which I was able to beat thanks to Wally bringing out a pair of Eelektrik once Archeops had come into play. Two Eelektrik were enough to consistently attack with Rayquaza-EX and Raikou, bringing me a win in the fourth round and lifting my record to 2-0-2. Two rounds and two losses later, however, I was pretty much done for in terms of the standings.

Overall, the St. Louis Regional was a learning experience for me, and even if we’ve learned these lessons before, sometimes we need to re-learn them if we don’t keep on our A-game at all times. For example, my lack of playtesting in a format that I’m less familiar with than Standard led to an underwhelming and dissatisfying performance at the biggest tournament I’ve played in all season. This forced me to think awhile about my deck choice and how I’d gone about my reasoning, and also made me consider the differences between Standard and Expanded.

One more positive that came out of my Winter Regionals experience was getting to spend time with the Pokemon community, and specifically getting to know fellow PokeBeach premium writer Treynor Wolfe in person. He and I decided to get a jump on the States format after missing out on day two of Regionals, building Greninja BREAK and Trevenant BREAK decks respectively. Treynor recently published an article on his musings on the Greninja BREAK archetype which can be seen here. This playtesting formed the early foundation for this article, as we take a look at the gold-plated, Item-locking Ghost-type Pokemon known as Trevenant BREAK.