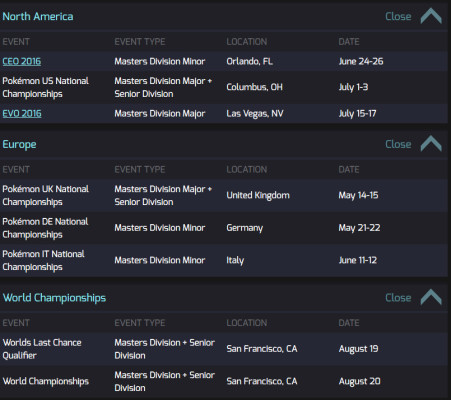 The official Pokemon website has just released details for the Pokken Tournament championship series, as you can read here.

There will also be a Last Chance Qualifier tournament at Worlds in San Fransisco this August where any player can show up, compete, and get invited into the World Championship the next day if they place high enough. Spacing will of course be extremely limited.

For Masters, 64 players will qualify for the World Championships: 16 players from North America, 16 from Europe, an unknown amount from Japan, and an unknown amount from the Last Chance Qualifier tournament. For Seniors, it will only be 16 players, with four from North America, four from Europe, and the rest from Japan and the Last Chance Qualifier.

The preliminary list of Pokken Tournament championships is shown above to the right. More tournaments will be added by Pokemon later.

Like organized play for the TCG and video games when they first started, there will probably be massive expansion in the coming years if Pokken Tournament proves to be a success (and why wouldn’t it?). This is only the first year of the game’s organized play system (and actually less than half a year), so expect next year to feature many more locations.