I wonder how many people will remember this news story by August. Between now and then, I’ll get hundreds of e-mails from readers who missed this news story and will ask why I didn’t post it. :p

In December, Pokemon released a batch of card supplies that were originally sold in Japan: they featured Hoopa Unbound, Mega Charizard, and Shiny Mega Rayquaza. Each of them were featured on card sleeves, deck boxes, and playmats, as you can see to the right. You can buy them in stores now.

All of the aforementioned Pokemon were released as card sleeves in Japan, so these will likely be the card sleeves we’ll get in America: 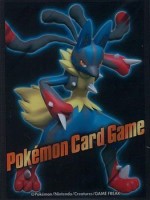