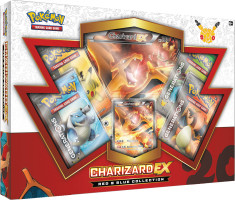 The “Red and Blue Collection: Charizard-EX Box” product image has been revealed thanks to Twitter user @PokeGrownUps! Note that this is the European edition of the box, not the American version.

The box will retail for $24.99 and will be released in stores by March 16th. As I reported before, we’ll also see the release of a Blastoise-EX box on May 18th, Venusaur-EX on July 13th, and Pikachu-EX on September 14th.

Charizard-EX appears to be a reprint of Charizard-EX from Flashfire (#12), but with new artwork of course. This probably means Venusaur, Blastoise, and Pikachu are also alternate art reprints.

Also, if you haven’t signed up for PokeBeach’s February tournament, now’s your chance! We’re partnering up with TCGplayer, who will be giving away up to four booster boxes of product to the top players! So go check it out!