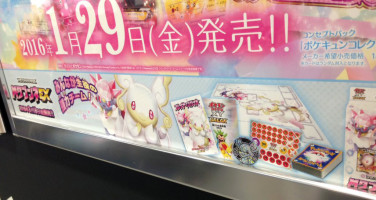 Be sure to check out our big announcement!

Thanks to Twitter user @mikkun_poke, we now have images of the M Audino-EX Mega Battle Deck, which will be released in Japan on March 18th. It’ll feature Audino-EX, a 220 HP M Audino-EX, and Diancie. It will also come with damage counters, Status Condition markers, a play mat, a Mega Audino coin, and an instructional booklet, all for 1,556 yen (about $9).

The same Twitter user also posted a spoiler for Flareon-EX from Pokekyun Collection, but they did not take a picture of it:

Ability: Flash Fire
Once during your turn (before your attack), you may move a [R] Energy from 1 of your Pokemon to this Pokemon.

When 1 of your Pokemon-EX has been Knocked Out, your opponent takes 2 Prize cards.