The official Pokemon movie website just posted the first story summary for the Volcanion movie (of which we still don’t have a full title yet). A big thanks goes to Bangiras for the translations! 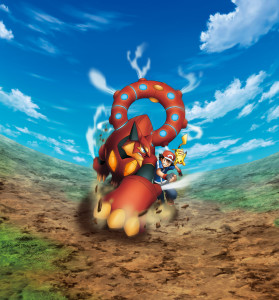 A Pokemon fell from the sky!

Ash and his friends are continuing on their journey to become Pokemon Masters when, suddenly, a lump obscured in white smoke tumbles from the sky.  While enveloping the surrounding area in white smoke, a figure emerges from the center.  It’s the Mythical Pokemon Volcanion.

Ash and friends are concerned as the human-hating Volcanion immediately turns to take its leave.  However, a shock wave from above causes Ash and Volcanion to be connected by a mysterious device, and they can’t separate themselves!

Volcanion runs off dragging Ash along with him, and they eventually reach Azoth Kingdom, a mechanized city with many large rotating gears.

Why did Volcanion fall from the sky?

And why is it placing its sights on Azoth Kingdom!?

The mechanized kingdom becomes the stage as the hottest legend in Pokemon history begins! 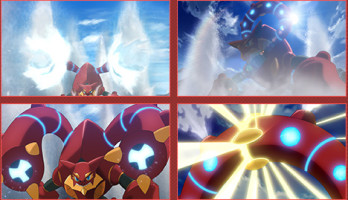 What is the power concealed in Volcanion’s arm!?

It’s said that its steam can knock over a mountain, and it can also conceal Volcanion’s body in thick fog.

The arm displays a complete range of movement, and the steam produced from the arm when it splits in two packs a punch! Unlike any Pokemon that have been introduced so far, it has both Fire and Water typing, and  the water-absorbing mouth on its arm can produce both Water and Fire-type attacks.  Also, the blue in the windows on top of its arm seems to be connected with the amount of water stored in its body.

Because of the water and fire, it can produce explosive steam inside its body, but when attacking it seems like water is Volcanion’s primary energy source.

What could the shock wave and mysterious device be? I bet we all have super creative ideas in mind, but the movie will find a way to make it as boring as possible. Remember, the movies are literally written for 8 year old children now. #pessimistpkmnmoviewatcherWPM :p