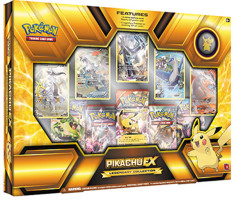 The Hoopa-EX and Pikachu-EX Legendary Collections are now available early at some Wal-Mart stores although their official release date isn’t until November 18th! 8-Bit bboc from YouTube already has both packages and has shared their contents on social media!

The promo cards have a new type of glossy finish, similar to BREAK Pokemon cards, but without the refracting circular pattern.

As posted before, each collection comes with a pin of either Pikachu or Hoopa, five booster packs of previous sets, and a PTCGO code card. Each box costs $34.99 at Wal-Mart.

Each of the featured cards are from Japan’s Legendary Holo Collection, which was released in July.

With all these “early” releases, you have to wonder if official release dates are now just “release by” dates rather than “release on” dates. Since releases have always been so sporadic in different parts of the country, perhaps distributors are now sending out product when they can and know they’ll eventually hit all stores in their area by that “release by” date (if they are indeed treating them like that). But this is just my baseless theory with zero evidence. It could also be that the distributors and stores don’t care anymore or aren’t paying attention, so who knows what’s going on. Only thing for sure is that since Primal Clash, we’re getting almost everything released ahead of time.