Hello PokeBeach readers! I hope everyone is enjoying the end of summer. I know that I have been extremely busy these past few weeks. I’ve begun graduate school down in Cleveland, Ohio at the prestigious Cleveland Institute of Music. This conservatory has produced a number of great musicians that play all over the world. My ultimate goal is to win a job in a full time symphony orchestra and studying in Cleveland has paid huge dividends already. I’ve secured two year long positions in regional orchestras in the Midwest as well as a one week trial period with a third for possible employment next year. These orchestras don’t pay anywhere near a full time salary, but they do pay a decent sum and garner invaluable playing experience. 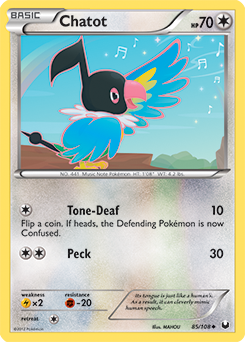 On the topic of today’s article, I want to outline what I believe are great plays for the upcoming Regionals and give you a guideline for your Regionals testing. When I think about the upcoming format, I have found it helpful to break it down into decks that should carry on mostly unaltered and totally new archetypes created by newly released cards or cards only accessible in the Expanded format. Thus, I’ve broken down how to think about the upcoming Regionals metagame into two different arguments: “why everything will stay the same” and “why everything will change.” I will frame these arguments with a handful of decks that fit under each category. By outlining decks that I believe don’t gain or lose much within the Expanded format as well as new archetypes created by the release of the newer cards, I will help you make a more informed deck choice for Regionals. But first, I’d like to take a minute to compare two of my life’s passions:

I find that preparing to take an orchestra audition parallels preparing for a Pokemon tournament, but that might be an entire article in itself!

In short, an orchestra posts that they have an opening, usually on a message board or forum specifically for musicians. This is similar to finding a tournament through Pokemon.com. Next, you send the orchestra your resume and if they deem you a good enough player for their group, they’ll send a list of the pieces of music they’d like to hear. For every audition, the orchestra will devise around five to twenty pieces of music. Usually these pieces are approximately 30 second snippets of music that test all facets of playing – from rapid technique, to lyrical melodies. These pieces might be analogous to the array of decks you could see at a tournament. The pieces range in difficulty from simple to incredibly difficult to master. Additionally, each individual player has their own set of excerpts that just don’t come as easily. This might be similar to your matchups against the field in Pokemon. You can practice the matchup or the piece to get better at it, but it still might never be something you’re confident in.

On the day of the audition, the mental preparation is key to success just as staying focused during a tournament is important to winning. During your audition, the orchestra audition committee will ask for a sample of pieces from the main list. Just like in a Pokemon tournament, this might mean that you get lucky and not have to play the piece you aren’t as confident in, a.k.a. your bad matchup. Usually, auditions have two to three rounds where they eliminate players after each round just like how a top cut functions in a tournament. After the final round, the committee will announce the winner. If you’ve prepared well enough, you may come out on top, but there are a lot of things that are out of your control, such as musical preferences. There’s a ton more I could say about this entire process, but the more I think about it, the more I see how being proficient at preparing for an audition pays large dividends when preparing for large tournaments and vice versa.

On top of these orchestra obligations, I have started a job at the Institute which involves audio recordings and teaching young students. Additionally, I’ve moved into an area that is dense with Pokemon tournaments. I’m used to attending half a dozen Cities in a year – last year I went to a measly five. Needless to say, the Pokemon population in Michigan is fairly weak, though definitely has more accessible tournaments than much of the country. However, Andrew Mahone has told me that North Eastern Ohio has upwards of 20 Cities in a year. Combine that with reasonable distances to Regionals in the Midwest and the East Coast, and the area I’m currently in gives me a huge chance to succeed this season. Quantity of tournaments does not equate to success in this game, but I always strive to make the most of every tournament I play in.

I’m thankful that my schedule will allow me to attend Ft. Wayne Regionals for the fifth straight year. This is easily my favorite tournament of the season for a multitude of reasons. I have a rich history with the tournament, winning the event two years ago. The tournament also has such a positive atmosphere every year. Toward the end of the year, players can get incredibly stressed in their chase for a Worlds Invite and occasionally put Championship Points above friendships and / or good sportsmanship. With early season tournaments like Ft. Wayne Regionals, I think that there isn’t that win-at-all-costs mentality to as severe a degree. Sure, people are there to win, but it isn’t as cutthroat as you might see at the end of the year. Additionally, no players are asking for people to scoop to them so they can get their Worlds invite, so that inherently boosts the positivity of the tournament.

Why Everything Will Stay the Same

The argument that our metagame will stay the same revolves around the fact that the Worlds format was one of the fastest formats since the first Black & White expansion was released. Incredibly powerful Item-draw cards like Trainers' Mail and Acro Bike accelerated the speed of some decks to unbelievable levels. Shaymin-EX’s release also gave many decks additional draw that allowed them to out-speed just about everything in the metagame. Sure, the Expanded format means we have access to a ridiculous amount of cards, but when those cards do not combo better than the cards in the most recent metagame, why should anything change?

Below are three decks that are essentially unchanged from last format. They might gain a few new tricks, but for the most part, their strategies remain unaltered. These decks have enough power to compete with anything the Expanded format throws their way.

While Donphan does gain some new tools, the basic hit-and-run premise stays the same. I consider this deck to be a solid tier two contender during upcoming Regionals. It’s a deck that can stand up to just about any other deck, but maybe doesn’t have the staying power to win a tournament without running into positive matchups. I’ve never been the biggest fan of Donphan (though I did pilot the deck to a Top 32 Regionals finish last year), but Jolteon covers a lot of the weaknesses Donphan had – namely, doing heavy damage to Yveltal and Yveltal-EX. It’s kind of ironic that Donphan can now be considered a counter to Yveltal since Jolteon single-handedly flips the matchup in Donphan’s favor. 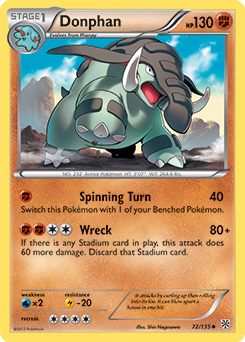 Unfortunately, Donphan didn’t see much play in any week one or two Regionals. Perhaps the issue was the increase of Yveltal-EX. Regardless, with Vespiquen winning Pennsylvania Regionals, this archetype should be a solid contender simply because of how easy it is for it to KO non-EX’s – an option it didn’t previously have. Also, the inclusion of Jolteon makes the Yveltal matchup less of a one-sided affair.

I’ve included a singleton copy of Wobbuffet. I feel like Wobbuffet has a great deal of strength in this format, shutting off cards like Shaymin-EX, Bronzong, and Blastoise just to name a few. Starting with it is incredible, but it’s usually not the best wall because it gives up a Prize when Knocked Out, unlike the more conventional wall, Robo Substitute.

I’ve included two Eevee with a 1-1 split of Flareon and Jolteon. The Eeveelutions, of course, give the deck the type coverage it so desperately needed in prior formats. It gives Donphan the ability to OHKO and deal lots of damage against certain threats that it was unable to deal with in the past. Flareon’s main target is Vespiquen, though it’s also quite strong against Metal decks. Jolteon helps a lot against Yveltal. I didn’t think that there was any reason to include Vaporeon as there aren’t many good Pokemon with a Weakness to Water right now. If you find that you are struggling to get out Flareon or Jolteon in a specific matchup, you can always bump the count up to two. With such an undeveloped meta, I’ve decided to keep the counts at one apiece to make room for other things.

The biggest weakness the deck has are Mill decks, Energy denial decks, and Archeops. Despite these set backs, the deck has solid power and great type coverage. It should be a force in the Expanded format.