Hello again PokeBeach! It’s nice to be back. For those of you not aware of who I am or didn’t check out my first article, let me fix that! I’m a Sixth Form student in the U.K. Studying Computing, Mathematics, and Geography for A Level. I started playing Pokemon in 2010 after playing at a HGSS Undaunted Pre-Release in Florida. Fast forward two years and I was able to win U.K. Nationals in Seniors with an Eelektrik / Zekrom deck. I traveled to Hawaii for the World Championships, hooking me on the game. Over the years I’ve met countless friends through the game and have improved my play. I placed 13th at the 2014 World Championships with Yveltal-EX / Garbodor. My favorite Pokemon is Yveltal, but I am also pretty fond of Victini!

For this article, I’m going to look into the new BREAKthrough set that was recently released in Japan as the two separate sets called Red Flash and Blue Impact. Since the set is a whopping 162 cards, I’m going to be mainly looking at Red Flash and some of the stronger cards in Blue Impact in this article. Just before all that though, let’s have a look at the results from week one of Regionals in the U.S. 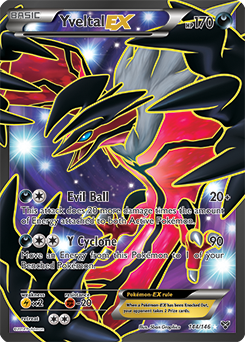 Yveltal-EX builds were able to shine with Israel Sosa picking up a win in AZ with Yveltal-EX / Archeops, including strong counter-cards such as Hex Maniac and Ghetsis to gain advantages against speed-based decks that rely heavily on Item cards. Overall, Yveltal-EX builds grabbed a total five spots across both Arizona and Texas’ Top 8, showing it’s definitely a force to be reckoned with. Archie's Ace in the Hole / Blastoise may not have been able to win one of the two Regionals, but got a total of six spots in the two Top 8, solidifying its place in the format. Interesting techs were included in the decks, such as Kyogre-EX, which takes double KOs on low HP Basics such as Combee and Eevee. This tech was played to capitalize on the Vespiquen / Flareon hype that came out of early Expanded tournaments from around the globe, swinging the matchup to Blastoise’s favor. Even Smash Turn has a use against Night March builds, being able to OHKO a Joltik and switch into a non-EX or into a Wailord-EX to wall the next attack.

Some interesting placements included Michael Pramawat’s win in Texas with Seismitoad-EX / Crobat. Pramawat was the only person in both Regionals to get a Seismitoad-EX build into Top 8, going with one of the more consistent Toad-based options that was able to make the finals of the World Championships this year. The extra damage from a Crobat line aided against Yveltal-EX and Night March builds, while also providing an advantage against the other hyped Seismitoad-EX builds that played Giratina-EX. A different “turbo” deck idea that got fourth place in Arizona was Zander Bennett’s M Rayquaza-EX / Shaymin-EX deck that only played two draw-based Supporter cards (Colress and N) with four counts of powerful Item draw cards like Trainers' Mail to get the fastest OHKO possible. Finally, two Vileplume decks made it into the two Top 8’s, both paired with Miltank.

What to Expect in Week Two

Heading into week two, Yveltal-EX and Archie's Ace in the Hole /  Blastoise are still huge forces to be reckoned with, so expect to see a good amount of both builds still sitting near the top. Counter plays such as M Manectric-EX paired with Garbodor and / or Hex Maniac should start to appear, while other people might take to some of the more interesting decks that placed in week one, such as the Vileplume builds. Vespiquen / Flareon should see a decline in play due to the top two decks being able to counter the build, but expect Seismitoad-EX to still see moderate play after its win in Texas. Finally, Night March was only able to get a single spot in both Top 8’s, and has problems versus Blastoise builds which run Articuno to take extra Prizes on low-HP Night Marchers, and Yveltal-EX builds that utilize Yveltal and Seismitoad-EX to slow down and keep pace with the speed-based deck. Night March should still have a slight showing in week two, but having problems with the top decks at the moment really hurts its chances.

In the U.K., our Regionals start on November 7th and are in the Standard format, with six Regionals taking place. The half of the Regionals we play alongside all of U.S. Cities will include BREAKthrough in the format, making it vital to know the different aspects of cards being released in the new set. To start, I’m going to look at the new mechanics coming out of the set.

A BREAK Pokemon retains the attacks, Abilities, Weakness, Resistance, and Retreat Cost of its previous Evolution. 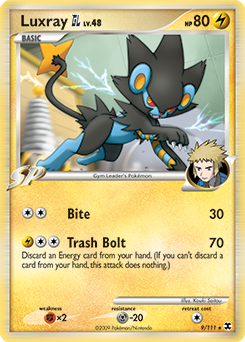 All the way back in 2007, Diamond & Pearl (the set) was released in the U.S., containing a new mechanic where a Pokemon can “Level Up” in the Active spot and gain extra HP, different Weaknesses / Resistances, new attacks, and new Poke-Powers / Poke-Bodies (essentially the same thing as Abilities) while also keeping the previous attacks of the pre-Evolution. At the start of the era, the cards were underwhelming and had little use outside of decks that focused around the non-LV.X counterpart, and since LV.X’s didn’t count as a different Pokemon, they took up a slot that might be better used for the non-LV.X. However, this all changed when Pokemon SP were released, making it much easier to Level Up these Basics. LV.X’s like Luxray GL LV.X and Garchomp C LV.X began to dominate and LV. X’s were commonplace to see on a player’s field.

So, what does this have to do with BREAK Evolution? BREAK cards almost resemble the LV.X concept by evolving from the previous Pokemon, retaining the attacks, Abilities, Weakness, Resistance, and Retreat Cost of its previous Evolution, but gaining extra HP and a new, stronger attack or Ability. Finally, maybe Evolution cards can finally find a focused role in the format without the help of Trainers such as Archie's Ace in the Hole! However, our format contains Pokemon-EX that need little setup and can be played down instantly with little effort, and the new BREAK cards need to match or be stronger than these easy-to-play Basics to make it worth all the effort of Evolution. Unfortunately the majority of BREAK Evolutions we have at the moment are lacking in power, making the effort of evolving to Stage 2 and even going to the third Stage feels wasted just to gain a mediocre attack or Ability. At the moment BREAK Evolution is like the early era of LV. X or even the first Mega Evolutions, where a new mechanic needs some sort of boost like Spirit Links or Basic Pokemon to Level Up from to really get them at the forefront of the format. There are, however, some interesting BREAK’s that might have a small impact on the metagame once BREAKthrough is released, which I will look over later!

Another new “concept” (not really a mechanic) is the introduction of cards that have dual effects. For example, Giovanni’s Plans has the option of either drawing until you have five cards in your hand OR doing an extra 20 damage to the opponents Active Pokemon. I like the concept of choosing what is best for the situation, and combined with recycling cards like VS Seeker gives you even more options throughout a game.

Now it’s time to look into what’s going to have some sort of impact on the format once BREAKthrough is released, in both Standard and Expanded. Since both formats differ drastically, some cards may have little use in Expanded but really change the metagame for Standard or vice versa. I’m going to break (pun intended) each card I believe has some sort of potential in both the Standard and Expanded format, alongside each Pokemon-EX and BREAK card in the set I see being played at some point. BREAKthrough will contain an astounding 160+ cards, six BREAK cards, eight Pokemon-EX, and 20 new Trainer cards. Let’s check em out!