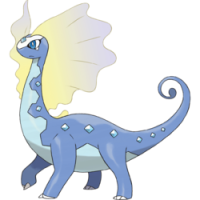 In addition to the Mega Aerodactyl-EX Premium Collection, a new “Aurorus-EX Box” will be released in America on January 20th! The box will include a never-before-seen holo Aurorus-EX card, a jumbo version of the same card, four booster packs, and a PTCGO code card.

The Aurorus-EX is not mentioned to be a promo, so it could be a pre-print of an Aurorus-EX that will be in the second BREAK set (Rage of the Broken Sky). Our second BREAK set will be released in early February, so this box will come out a few weeks before then. We’ll find out what the deal is when we have the box’s real product image, so stay tuned! Thanks goes to Andrew for the news!