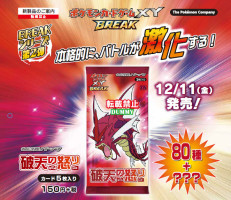 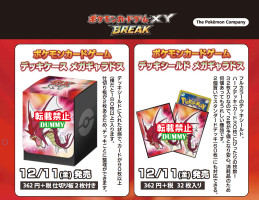 Japan’s next XY set will be named Rage of the Broken Sky and will be released in Japan on December 11th! It’ll contain 80 cards, excluding secret rares. This will be the ninth XY set and the second set of the XY: BREAK block. 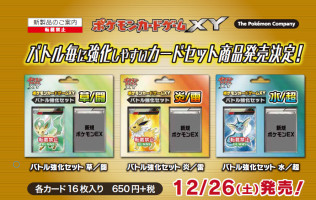 Two weeks later on December 26th, Japan will also be getting three “Battle Strengthening Sets.” Each mini-set is a pack of 16 predetermined  cards. One of them will feature Leafeon and Grass / Fighting Pokemon, the second will feature Jolteon and Lightning / Fire Pokemon, and the third will feature Vaporeon and Water / Psychic Pokemon. Each pack will also come with an EX, which will potentially be the pack’s featured Eeveelution. They will each cost 650 yen, or between $5 and $6.

Thanks goes to Bangiras for the translations!

Also, I finally found someone who can help with our server issues, so please excuse any downtime / errors / e-mail issues this week (not that you haven’t the whole summer). I’ve been trying to login to the site to make this news story since yesterday, so even I’ve been having trouble. Remember that this site is completely run by myself and other Pokemon fans, so if you can ever offer any kind of help, please let us know! Know programming? Server maintenance? Want to write news stories? Want to bring something new to the site? Let us know!