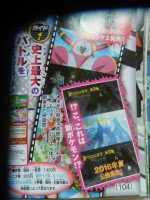 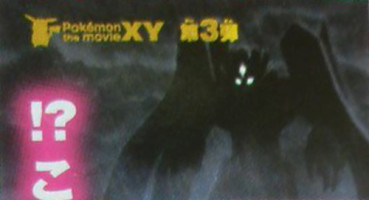 CoroCoro has revealed screenshots from the teaser trailer for 2016’s Pokemon movie, which will show after the Hoopa movie plays in theaters. The screenshots appear to show a new Pokemon, though it is silhouetted (of course).

We still need Zygarde and Volcanion in a film, and Zygarde is likely getting featured next because of Pokedex number, so this new Pokemon could just be a new forme of Zygarde. Thousand Arrows and Thousand Waves, two moves programmed into X and Y, are expected to be the signature moves of Zygarde’s new forme(s). Both are Ground-type attacks, and this new Pokemon certainly looks like a colossal Ground-type. Not to mention it’s just obvious Zygarde will be the mascot of the next game(s), like Rayquaza, Giratina, and Kyurem before it.

The text over the silhouette asks, “Is this a new Pokemon?” Since we don’t consider Giratina Origin Forme or Black and White Kyurem new Pokemon, the implication behind this question seems obvious. (Why question if it’s a new Pokemon, especially when its design doesn’t match any existing Pokemon? Because it’s probably not a new Pokemon, as would be the logical conclusion. It’s a forme.)

If you ask me it kinda looks like they mashed Groot and Zekrom together with some Evangelion thrown into it. :p