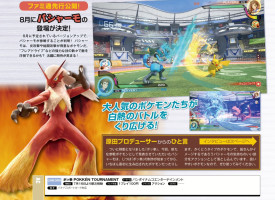 Famitsu Magazine has revealed Blaziken as a playable fighter in Pokken Tournament. Its existence was hinted back in 2013, but this is the first time we’re actually seeing it. It’ll be joining Charizard, Pikachu, Machamp, Gengar, Suicune, Gardevoir, Lucario, and Weavile.

Update (Thursday, 4 AM): The first video footage of Blaziken has been revealed: