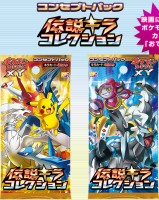 The first several cards from Legendary Holo Collection, announced a while ago, have been revealed by the official Japanese Pokemon website! The mini-set will feature two booster pack designs, as you can see above. Thanks goes to Michael S. for the translations!

[P] Dimension Ring: Search your deck for 2 Item cards, reveal them, and put them into your hand. Shuffle your deck afterwards.

[P][P][P] Wonder Trick: 100 damage. Your opponent switches the Defending Pokemon with one of his or her Benched Pokemon.

Ability: Earth Awakening
When you attach an Energy card from your hand to this Pokemon, heal 20 damage from this Pokemon.

[C] Gather Light: Move any number of Energy attached to your Benched Pokemon to this Pokemon.

[C][C][C] Judgment Burst: 10+ damage. This attack does 30 more damage for each type of Basic Energy attached to this Pokemon.

Reshiram, Latias, and Palkia were also revealed on the set’s booster box image, though they’re too blurry to read.