Good day ‘Beach goers! It has only been a couple weeks since my last article, and already, so much has gone down. A Boundaries Crossed – Roaring Skies metagame was born at the third weekend of North American Regional Championships, torn apart in a matter of days thanks to the infamous ban of Lysandre's Trump Card, and I placed 16th at the Madison, Wisconsin Regional Championships with my Raichu / Ninetales deck, which will be the focus of this article. I’ll be going over the initial concept and creation of the deck, the list I used, in-depth reports of each of my matches, as well as what I believe the deck will look like after the ban of Lysandre’s Trump Card comes into effect on June 15th. But before I show you all the ins and outs of the deck I used to take 16th place at Regionals, let’s talk about this Lysandre’s Trump Card ban I’ve already mentioned a few times.

And if you haven’t had the chance to sign up for PokeBeach’s Premium Subscription service yet, now is the perfect time to join us! With only weeks to go until Nationals and a few months from the World Championships in Boston, we will be providing the best and most up to date information to keep you all as prepared as possible for your respective events. Have a question about the deck you are working on? Subscribers get to join the Premium Writers and I in the Subscriber’s Secret Hideout forum for personal deck advice and discussions! Hopefully I can meet you all there!

Lysandre's Trump Card had established itself as a defining factor in the Pokemon Trading Card game during the six months it was legal for Standard play, peaking in potency during the competitive debut of Boundaries Crossed – Roaring Skies in Wisconsin and Georgia. As the new format began to unfold, it became clear to me just how powerful Lysandre’s Trump Card had become. Trump Card in combination with new non-Supporter draw options such as Shaymin-EX and Trainers' Mail, and older cards like Acro Bike and Roller Skates, allowed players to draw through their entire deck multiple times a game. The result was a game in which resource management was marginalized, individual games could last upwards of 45 minutes and players could recklessly employ multiple playsets of powerful Item cards each game. Despite the shortcomings of our Nationals and Worlds format to be, I was still extremely frustrated (to put it lightly) when I heard about the upcoming ban of Trump Card. I, like many others, had been testing our current format for months in preparation for Nationals and Worlds. I even drove out to the Regional Championship in Madison, Wisconsin with the intention of gaining invaluable first hand experience with the format ahead. But now, for what? The deck I piloted to a 7-1-1 finish during Swiss rounds at Madison is unplayable in its current form without Trump Card. Same goes for the Shaymin-EX / Seismitoad-EX deck that won the event at the hands of Jason Klazynski. Why couldn’t they wait until after Nationals to ban the card? Why couldn’t they wait until after Worlds? What has been the point of everything we’ve done in preparation up until now if it was all done in a Lysandre’s Trump Card context?

After letting things sink in for a few days, I have been able to look outside my personal situation and see the ban in a positive light. The game will, undoubtedly, be healthier if resource management is inducted back into gameplay. Additionally, single games have no business lasting over 45 minutes a piece. Three of the nine rounds I played during day one of Swiss only had one completed game in our best-of-three series when time was called. One series, vs. Alejandro Luna’s Primal Groudon-EX deck, went to time immediately after our first game concluded. Though the ban means that I will have to figure out a new deck for Nationals and Worlds, so does everybody! One of my faults as a player is that I get very attached to certain cards and decks, which sometimes keeps me from being as flexible as I should with my deck choice. This ban will ultimately help me to be a more flexible player by forcing me to reconsider the game with only weeks to go until the United States National Championships. We as players can either sit around being mad that our favorite decks need to be reworked or trashed all together, or we can rise to the occasion and overcome the challenge presented to us. Though the results of the Madison, Wisconsin Regional Championship no longer directly influence what will be played at the United States National Championship, there is still an abundance of valuable information to be taken from the event, and I feel like I am better poised as a player heading into Nationals with the experience I had.

The Rise of Raichu 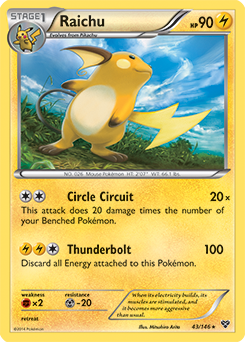 During my eight hour trek from Ohio to Wisconsin two weekends ago, I had a lot of time to talk and think about Pokemon Cards. My girlfriend Kirsten and I were joined by fellow Ohioans, Chris Fulop and Corey Scott for the trip, and though Kirsten was locked into playing Seismitoad-EX / Slurpuff (which she piloted to a top 64 finish with a 5-2-2 record), I was very undecided on what to play. I had spent the majority of my time up until then crafting a Dragon M Rayquaza-EX list, however, I did not feel comfortable with the high maintenance nature of either M Rayquaza-EX deck heading into what I was correctly predicting to be a field of disruption / Item lock decks. My latest PokeBeach article ended with some musings on the potential of Raichu from XY. I had a feeling Raichu would be great heading into the third weekend of Spring Regionals, but I was still unsure which partners would be the best fit for the Electric Mouse. Though Raichu / Leafeon seemed to have all the answers, in practice, the deck was not as flexible as I would have liked.

With all these thoughts and uncertainties at the forefront of my mind, it didn’t take long for the car ride to turn into a lengthy dissertation on Raichu possibilities. I spent hours in the car going back and forth with Chris Fulop wrestling with questions like: Does Raichu need a backup attacker, or is the Mouse powerful enough to function on his own? Is it important to play a draw engine that can function fluently under Item lock, or is the turbo Shaymin-EX engine potent enough to sufficiently set up with only one turn of Item usage?  Does Raichu function better as his own archetype, or as a supporting attacker alongside a more powerful partner like M Rayquaza-EX? After a while, my friend Corey starts laughing and we ask him why. He says “You guys have been talking for hours and I still have no idea what a good play for tomorrow would be!” And he was right! Theory’mon can only get you so far. It wasn’t until that night in the hotel that things began to unfold.

Kirsten and I arrived at the Madison Concourse Hotel at about 11:00 PM and many of our friends were beginning to wind down. In typical Pokemon fashion, we had seven people staying in a single hotel room. Because it was late, no one seemed very enthusiastic about helping me crack the perfect Raichu deck, no one except my good friend Nicholas Bailey. 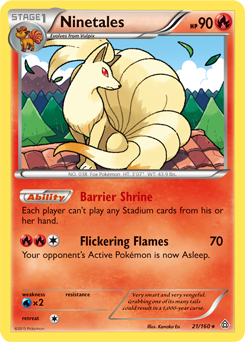 The first list we came up with, which featured Crobat as a means of supplementary damage, was a bit of a mess. We knew that Crobat and Raichu were a strong combination, because Crobat allowed the player to make up damage if Raichu is ever short of a OHKO, but in our few games testing we realized that it was difficult to get multiple Crobat into play and even more difficult to keep a full Bench of eight with Sky Field to max out Raichu’s damage. The deck was slow and clunky and not nearly as streamlined as we wanted it to be. In an attempt to alleviate the issue of having our Sky Field countered, we tried to fit a very thin line of Ninetales from Primal Clash in the deck. Upon testing, Ninetales was fantastic, but the Crobat line seemed to cause more issues than benefits, so we tried gutting it all together. The spots we gained from cutting the Crobat line went to beefing up the Ninetales line and adding speed / consistency with the “turbo engine.” The results were astounding. What we ended up with was a deck that was resilient, flexible, able to set up in one turn and capable of effortlessly streaming OHKOs on hefty Pokemon-EX for one Energy beginning on turn two. I am very proud to introduce to you, the deck that led me to a second place finish during day one Swiss rounds at the Madison, Wisconsin Regional Championship, Raichu / Ninetales.

This deck was an absolute joy to pilot in Wisconsin! The deck runs incredibly and the whole roster is freakin’ adorable. How could it not be fun? But unfortunately, because of the inclusion of Lysandre's Trump Card, this list will only be legal in its current form until June 15th, 2015. So if you happen to have a League Challenge or National Championship coming up this weekend, I highly recommend giving this deck a try! For the rest of us, however, we are back to the drawing board… again. Converting this deck to a post-Lysandre’s Trump Card world will not be as easy as removing the Trump Card. Because this deck only has four copies of its 90 HP main attacker and four Energies with which to attack with, it relies very heavily on Lysandre’s Trump Card to cycle resources back into the deck. Fortunately though, I have been hard at work this past week and have forged a new Raichu deck that does not need Trump Card! I feel very confident with the new deck heading towards Nationals, and I am very excited to show it to you before everyone else knows about it! But before we get on to that, I’ll go through my experience with Raichu / Ninetales at Wisconsin so that you have the opportunity to learn from my success as well as my mistakes! So are you ready to improve your game right here and right now?