Hello everyone! I’m new to writing articles for PokeBeach and this is the first time I’ve ever put my opinions to words over the internet, so I feel an introduction is in order. I’m Treynor Wolfe, a competitive Pokemon TCG Master division player since 2011. In addition to the Pokemon TCG, I also play many other strategy games, including X-Wing, Flames of War, Bolt Action, and I have also played Warmachine, Warhammer 40k, and Warhammer Fantasy in the past. Please do let me know if you’re new to any of these games or play them! I’d love to have a conversation about them. I’m also an avid baseball fan, being a huge Oakland A’s fan since I was very young.

As for my Pokemon experience, I’ve been playing Pokemon TCG nonstop ever since the Majestic Dawn – Triumphant format. I’m a Nebraska Pokemon player that competes primarily in the Kansas City area. I’ve been as far west as Colorado, and as far east as Indianapolis for the three years I’ve been to the National Championships. This is my first year earning an invite to the World Championships, due to my amazing State and City Championship runs this year, including two States wins, two States top 4s, two Cities top 4s, and two Cities top 8s.

Enough about me though. The topic I want to talk about is the impact of Special Energies in our current format. After looking at how the recent Lysandre's Trump Card ban affects all of the popular decks in the format, I noticed the decks that come out on top all heavily rely on Special Energy. Knowing this, it’s reasonable to assume decks that counter the usage of Special Energy by not letting them attach it, attack with it, or removing them entirely will be pretty solid plays come time for the US National Championships, and don’t worry, there’s no shortage of cards and decks that target the use of Special Energy. Before talking about some of these concepts though, I think it’s important to look at the decks that are most heavily affected by the ban, so you can see why these Special Energy-centered decks are some of the best in the format, and so we can learn how to effectively counter them.

But first, I want to let everyone know just how awesome a PokeBeach Premium Subscription truly is! Now is an amazing time to get on top of things, as many of us Premium Writers have done loads of testing and are offering our opinions to you. With the ban of Lysandre's Trump Card, the format has been changed substantially, and it’s largely unknown what decks will come out on top at Nationals this year. All of us have tested extensively since we heard news of the ban, and we’re offering our lists and opinions exclusively to you! Please do join us in the Subscriber’s Secret Hideout forum for us to personally give you deck advice and have in-depth discussions with you! I hope to see you all there!

I honestly couldn’t believe the news when I heard that Lysandre's Trump Card was banned. I heard it was banned in Japan, but I always knew Japan plays Pokemon a bit differently than here, and that something happening over there doesn’t necessarily happen in the US. So with this big news, a lot of the testing I have done in the past in preparation for Nationals is going to have to be redone and revisited. Decks that were invalidated in the past are now fair game again, a decks that had glaring weaknesses to Trump Card (I’m looking at you Night March!) are going to be the decks to play or beat come Nationals.

Seismitoad-EX has had a significant impact on our game since Rith Ke used it to great effect in his Seismitoad-EX / Slurpuff deck that he used to win multiple Cities. Seismitoad-EX was being used as the main attacker in the deck, as opposed to being a utility attacker in a deck like Yveltal-EX. 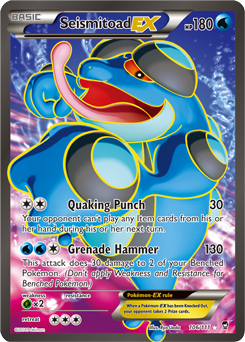 The main focus of this deck was disruption. Using cards such as Crushing Hammer, Enhanced Hammer, and Head Ringer, the deck could reasonably strip you of your Energies and your ability to retreat to remove the Poison from Hypnotoxic Laser. Lysandre's Trump Card allowed you to recycle all of these powerful cards and play a game that slowly bled you to death while forcing you to play under constant Item lock.

The next new version of the deck used Shaymin-EX to draw more Item-based disruption cards, replacing Slurpuff. Seismitoad-EX-based decks made a large portion of the top 32 decks at Wisconsin Regional Championships, proving how big of an impact this deck makes on the Boundaries Crossed – Roaring Skies format.

Without Lysandre's Trump Card, this deck cannot play unlimited amounts of Energy removing Trainers such as Crushing Hammer, or cards to increase Seismitoad-EX‘s damage output, such as Hypnotoxic Laser and Virbank City Gym. Limiting these decks to only four of each of these powerful cards makes it very challenging for them to continue their disruptive Item lock and keep up a steady amount of damage on your Pokemon. Some argue that this deck isn’t dead, but from my testing, it just doesn’t work very well anymore. I’m not going to go so far as to say king Seismitoad-EX is dead, but it will be played in significantly less numbers than was expected at the US National Championships. There will be variants that I see as more viable than others, mainly Seismitoad-EX decks that are more offensive-based, rather than straight disruption, such as Seismitoad-EX / Crobat and Seismitoad-EX / Yveltal-EX. Seismitoad-EX paired with Crawdaunt appears to be a solid play for Nationals as well, but I don’t believe this deck is as consistent as Shaymin-EX variants. Regardless, that particular deck isn’t as powerful as it was with Lysandre's Trump Card.

I’m going to diverge a bit here and say that I’ve always felt disruption-based decks have been just as much a part of the game as any other type of deck. I have never looked down on players that play these types of decks, as they have been prevalent in the game since I first started and Vileplume decks were alive and well. The relative ease for Seismitoad-EX decks to pull off their Item lock strategy has always bothered me a bit though. 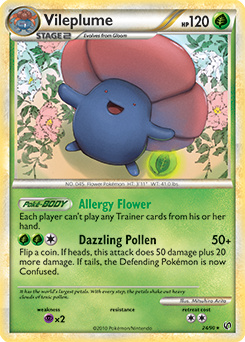 In the past, decks that played Vileplume were relatively slow, and the Vileplume card limited both player’s ability to play Trainer cards, and in addition to that, the combination of getting out a Vileplume was relatively slow as well, with a turn two Vileplume being fairly lucky. I feel like disruption-based Seismitoad-EX decks were a little fast at pulling off their strategy for my liking, with only needing a Seismitoad-EX Active and a Double Colorless Energy to lock down your opponent. I see a lot of players that have been pretty pessimistic about the game’s future come back happily now that Lysandre's Trump Card has been banned, and the Seismitoad-EX decks that they never enjoyed playing against will be played significantly less.

I believe it’s safe to assume that Seismitoad-EX-based decks will see much less play, and decks that had a weakness to this kind of deck are going to be played a lot more. No more will you have to play against four-five lock decks every tournament.

Now let’s take a look at the decks I believe gained the most from Lysandre's Trump Card‘s ban. Most of them due to Seismitoad-EX‘s drop in popularity, but some for other reasons. I believe these are all strong decks that many players will be playing at US Nationals, with overall very solid matchups. Once we have looked at these decks, we can get to the main topic I’d like to discuss – Special Energy hate – and how it can very effectively counter most of the best decks in the format. I’ll also show you guys some decks I’ve been testing that I believe are great choices for Nationals, which use this tactic to the best of their abilities.