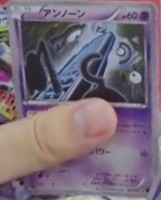 If you look closely at the poster, it shows three Pokemon-EX. The one at the top is the previously revealed Machamp-EX. The very small one in the bottom right corner is Hoopa-EX. But the largest one under Hoopa Unbound’s jaw appears to be a Mega Evolution, perhaps M Tyranitar-EX? I can’t say for sure – what do you think it is?

We will probably have a clearer photo of the poster once it goes up at Pokemon Centers, so stay tuned! New Pokemon-EX are on the way!

(I guess since Japan is doing another live action TCG commercial, we’re going to get one of these ’90s CG commercials for our Ancient Origins commercial in America. :p)