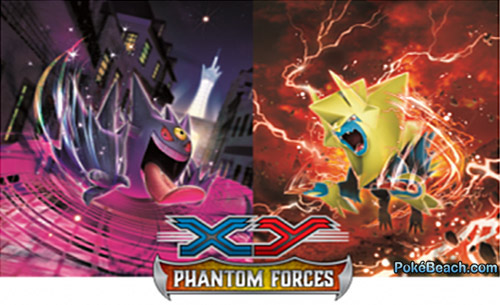 We have received word that America’s November set will be named Phantom Forces, which is of course Japan’s Phantom Gate set (of which we know very little about). But with the following English set information, we now know more about the Japanese set!

Phantom Forces hits store shelves on November 5th and will will feature over 110 cards. There will be six Pokemon-EX in the set and two Mega Evolution Pokemon: M Manectric-EX, M Gengar-EX, Manectric-EX, Gengar-EX, and Aegislash-EX (from the Hyper Metal Chain deck) are all confirmed. Dialga-EX from the same deck will likely be in the set too.

A new mechanic being introduced in the set are “Spirit Link” cards, which will “push the limits of Mega Evolution.” No further information is known about these Spirit Link cards yet, but we’ll bring it to you as soon as we hear it!

To discuss this set, check out this news story’s forum thread.