Chesnaught-EX, Delphox-EX, and Greninja-EX will be featured as holo promos in June’s set of “Kalos Power Tins.” The featured Pokemon may be the XY-P promos of the three that have been released in Japan over the past few months, which are re-posted below. Each tin will come with four booster packs and a TCGO card. The artwork on the tins comes from the XY Beginning Set, though there are no Pokemon-EX in that product. 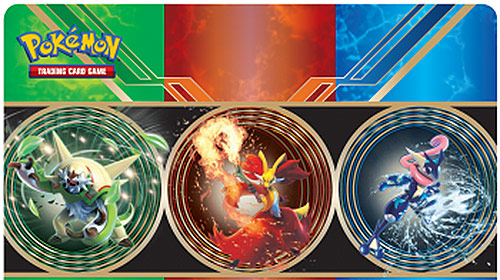 When Pokemon-EX has been Knocked Out, your opponent takes 2 Prize cards.

[R] Psybeam: 20 damage. Flip a coin. If heads, your opponent’s Active Pokemon is now Confused.
[R][C][C][C] Wonder Flare: 80+ damage. Your opponent reveals his or her hand. This attack does 40 more damage for each Energy card you find there.

[W] Sharpshooting: This attack does 30 damage to 1 of your opponent’s Pokemon (do not apply Weakness and Resistance to Benched Pokemon).
[W][W][C] Aqua Blast: 120 damage. Discard 1 Water Energy attached to this Pokemon.

When Pokemon-EX has been Knocked Out, your opponent takes 2 Prize cards.