Update (Thursday, 6:00 PM): Struck out one of the paragraphs below and reversed our arguments. The more we examine the page, the more this looks to be the real deal. | To discuss this news story, check out this thread!

Two photos of what appears to be a new Mewtwo forme were uploaded to the Internet a few hours ago, as you can see below. Although we saw them immediately, we wanted to proceed with extreme caution since April Fool’s was yesterday and Mewtwo’s design just looks so… Photoshopped. Therefore, we decided we weren’t going to post them without examining them in-depth. 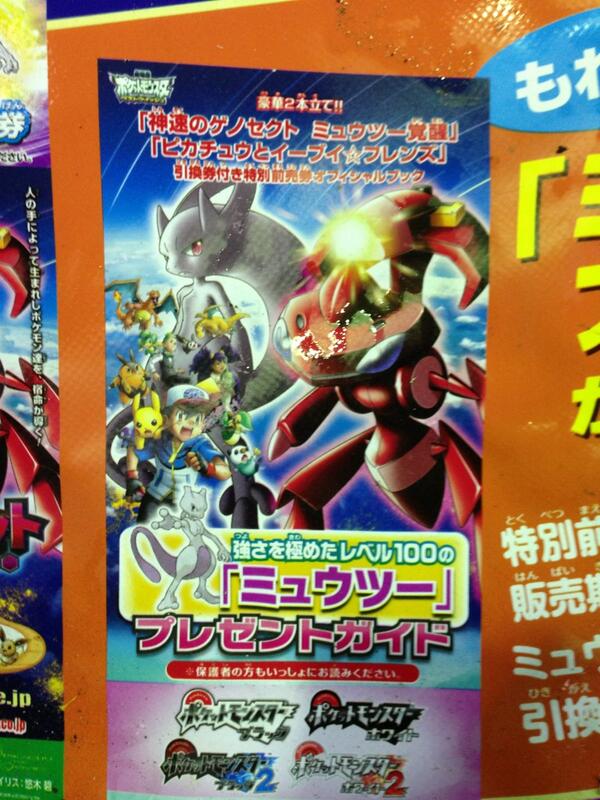 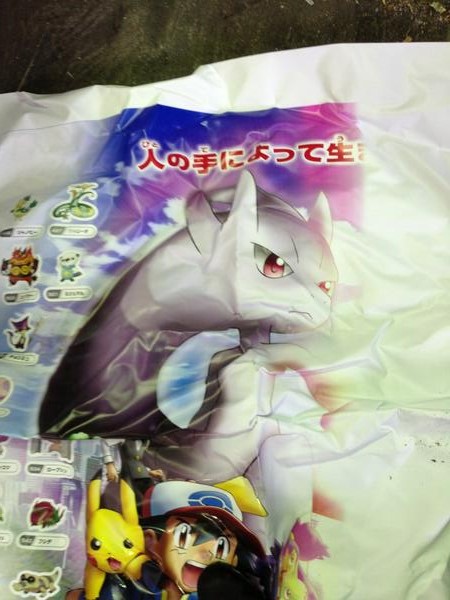 Mewtwo has lost its tail, which has now moved to the back of its head. Its head features sharper “antennae” than the original design and a new circular ridge. Mewtwo’s hands appear to be wider, though you can barely see them, and its legs have been redesigned to look more mechanical. This is of course assuming that this is Mewtwo and not a new clone! (Perhaps Mewthree?)

As for legitimacy, the movie poster in the first image above has a completely different background than any of the 16th movie posters released so far (pictured below). The background appears to be an extension of the background that has been used in all of them. Therefore, if this is a fake, the artist put an extraordinary amount of time into making the background look different when they could have just ripped the high-quality one used on the other posters from the Pokemon Movie website. In the past, Pokemon has released various versions of the same poster with some minor differences, so in at least this facet, the poster above appears to be real. Again, why fake a poster with a new but similar background? 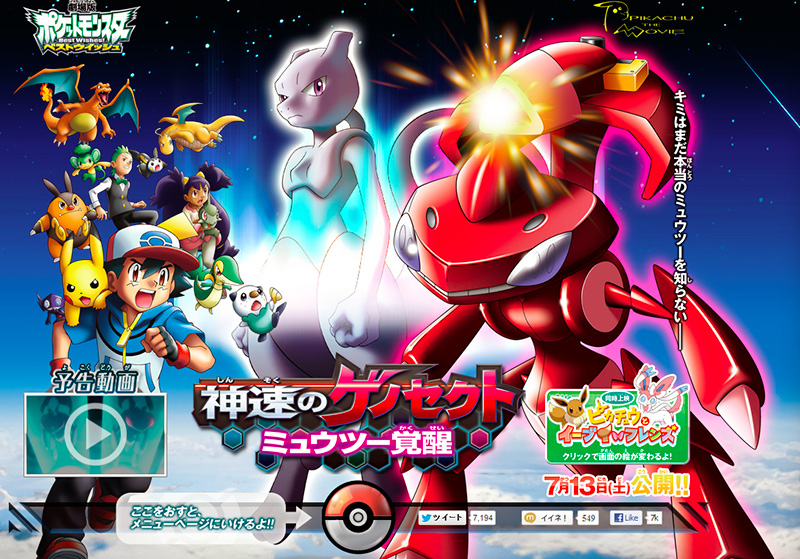 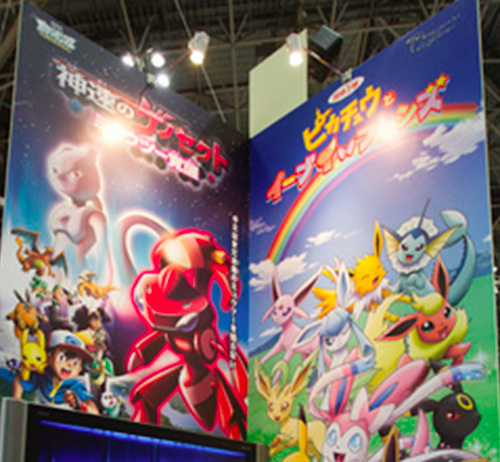 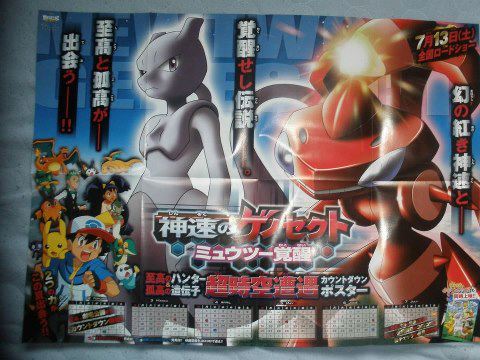 Behind Oshawott and next to Ash’s elbow we see Mewtwo’s new leg. While Mewtwo’s whole body has a white radiant glow on the edge, the part where Ash’s elbow touches the leg does not. There also looks to be a few gray smudges on the page, and while the one I point out near Mewtwo’s head could be a lens flare, there is no light coming up from above to warrant it. What’s with the inconsistency? There’s no radiant glow because Ash is supposed to be in front of Mewtwo’s leg blocking it, just as with all the other characters. The blurry gray smudge of Mewtwo’s body is because of JPEG compression trying to lower the amount of detail in the area since the area is the same gray color. The only thing that still looks off is the gray smudge near Mewtwo’s eye, but as stated before, that could just be a lens flare, perhaps coming from Genesect’s lit-up cannon. So, nothing appears to be wrong with the poster. 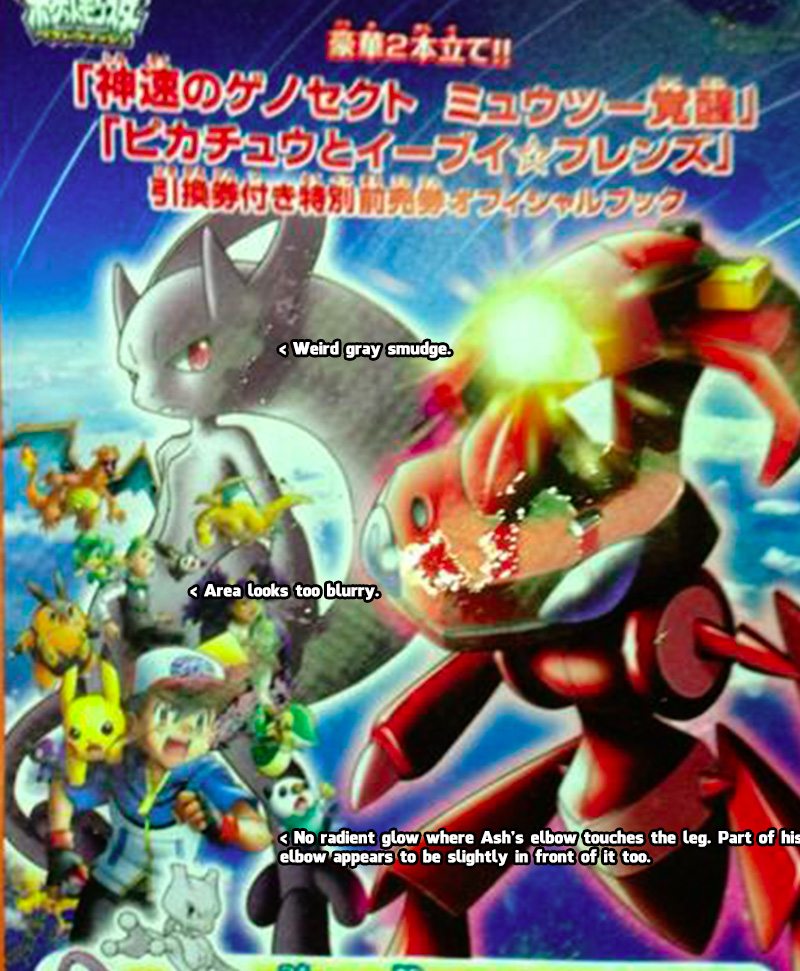 In the second photo released, we see a higher quality version of the Mewtwo. But there’s a few problems. Why is the image crinkled up? To cover up any potential flaws the artist might have made? Also, why does the page run out of ink on the right side? Why isn’t the top of the poster going all the way to the top of the paper? Why does the page look like it’s been cut in half? 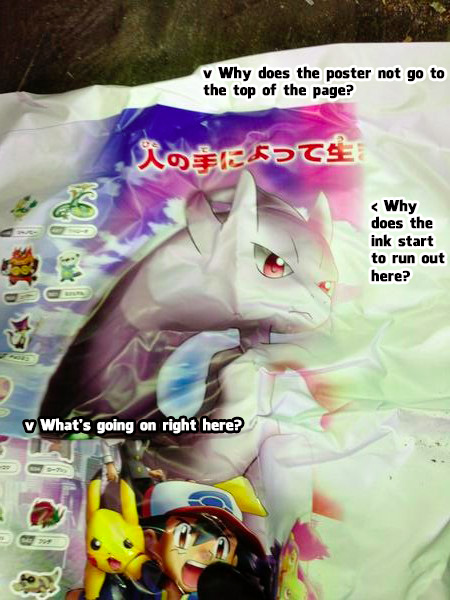 So what are these supposed to be photos of if they are real? They are supposed to be a 16th movie ticket pamphlet, which advertises the fact you can preorder tickets for the film. You can find them at many different stores any time a Pokemon movie comes out. These pamphlets are not supposed to be released until April 20th (three weeks from now). That seems a bit far off for someone to have obtained them early unless they work at the actual printing company. Going back to the previous paragraph, could this be a failed print of one of the posters? Did the printer get jammed? The damaged paper and lack of ink might fit that scenario. Maybe whoever posted these photos grabbed it from the print line.

The Japanese used in the images is 100% accurate, though if this were a fake, the artist could have easily taken a legitimate image and altered it as with past fakes. They could also just be Japanese and know how to write the language. Regardless, unlike most fakes, the writing checks out.

For now, we’re not sure what to believe. Some things check out while some other things seem a bit suspicious, including Mewtwo’s rather odd design. For now, we’re going to post this as unconfirmed. We’re only posting these images to let you know that they’re out there, and that people are talking about them, but we have no way of confirming their legitimacy until Pokemon makes an announcement (and if this is real, we might find out on Saturday?). As with Kyurem, some of the film’s marketing stated that we had not seen the real Mewtwo yet, so this may very well be its new forme!