The official Japanese Pokemon website has finally revealed BW7 Plasma Gale, which we first learned about over a month ago. Its booster box promo will be Crobat, which, like previous sets, will appear in the set with alternate artwork. Thanks goes to Rogan for its translation! 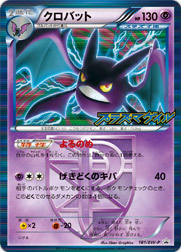 Ability: Night Sight
Once during your turn (before you attack), you may draw a card.

[P][C][C] Deadly Poison Fangs: 40 damage. The Defending Pokemon is now Poisoned. Put 4 damage counters on it instead of 1 between turns.

The side of the set’s booster box also reveals that Rotom and Donphan will appear in the set. Previously, we learned that Lugia-EX would be in the set and that Klinklang would be featured in the half deck.

Starting September 14th, the day Plasma Gale is released, you can receive one of four promo cards for every 1,000 yen you spend on Pokemon TCG products at participating stores. The promos are Skarmory, Bouffalant, Team Plasma’s Poke Ball, and N (a reprint with new artwork). It is unknown if, like Crobat, the promos will appear in the set with alternate artwork.