A new BW6 commercial on the official Pokemon card website has revealed a couple new cards from Freeze Bolt and Cold Flare: Marril, Lunatone, Flygon, and Oddish will be in Freeze Bolt while Dusknoir, Scizor, Electivire, and Timburr will be in Cold Flare. Click the thumbnails below for larger images.

Ten other cards were already revealed last month, in addition to Black Kyurem-EX and White Kyurem-EX, Crystal Wall and Crystal Edge, Flygon (promo version of the one below), and Charmander, Charmeleon, Squirtle, and Wartortle. The sets will be released on July 13th.

A Keldeo promo card was also revealed on the site. It will be given out at Pokemon Centers starting July 13th. As you can see, it’s stamped with the Pokemon Center logo and is a reverse holo. Its translation is below. 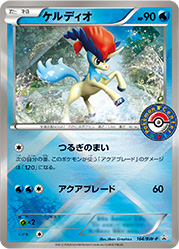