The cover for the upcoming issue of CoroCoro has leaked several days early and reveals what appears to be new formes for Tornadus, Thundurus, and Landorus. The new Tornadus forme matches the mysterious bird silhouette from the Pokemon AR Searcher game preview last month – it seems Nintendo was actually trying to foreshadow new reveals when they first showcased the game! The person who posted the scan also stated that the magazine reveals Brock, Bianca, Cheren, and Giovanni will be in Black 2 and White 2, but we’ll have to wait for the rest of the magazine to leak to find out what that’s about!

Update (1:00 AM) – The poster of the scan has revealed more information! First, the new formes for Tornadus, Thundurus and Landorus can only be caught in the Pokemon AR Searcher game, which of course can then be transferred over to Black 2 and White 2. Second, Cheren will appear in the games as a Gym Leader. Third, “Pokewood” will replace Black and White‘s musicals (a combination of Pokemon + Hollywood?); it’s apparently the movie theater feature that appeared in several of the game trailers.

Update (3:45 AM) – The same source also says that Misty, Green (Gary), Lance, Volkner, and Steven Stone appear in a new facility run by Cynthia where you can battle them. That’s probably where we’ll see Brock and Giovanni as well.

Update (4:00 AM) – Lt. Surge, Erika, and Janine will also be present. Apparently the facility is called “World Tournament.” It seems you’ll be able to battle all previous Gym Leaders and Elite Four Champions there. 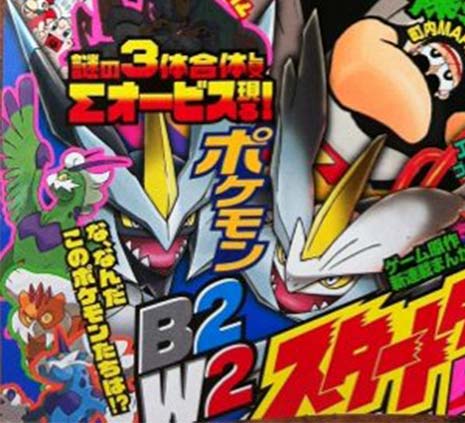 Oddly, there are no placeholders for the formes in Black and White; how this will effect cross-game compatibility is a mystery at this point. Diamond and Pearl had placeholder data for Rotom, Giratina, and Shaymin, and Black and White had it for Kyurem, so it seems these formes were not originally planned and that Gamefreak decided to create them after the release of Black and White (that’s not confirmed by any means, but seems to be the case based on the aforementioned facts). If Gamefreak could do this for the Cloud Trio, this means there could be a new forme for any Pokemon now!

My fun theory: Tornadus, Thundurus, and Landorus are all male, right? Well that Tornadus forme above certainly looks like it’s a bird wearing a bra. So could these be female versions? That would explain why there is no forme data for them in Black and White: these could be gender differences instead! Or at least, that’s how Gamefreak could program them into the new games to trick Black and White into detecting them as normal Tornadus, Thundurus, and Landorus. Guess we’ll find out what’s going on soon!