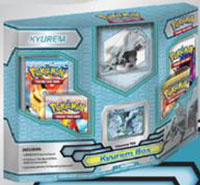 A new “Kyurem Box” has been announced and will come with a new Kyurem promo, a Kyurem figurine, and four Black and White series booster packs. The Kyurem card’s artwork doesn’t seem to match any that have currently been released in Japan, so it will probably be English-exclusive. No release date has been announced yet.

Test the boundaries of your skills with the powerful Kyurem by your side! In the Pokémon Trading Card Game: Kyurem Box, you’ll find the amazing Kyurem as a spectacular collectible figure that brings legendary force to your training! Plus, you’ll get four booster packs from the Pokémon TCG: Black & White Series expansions and a specially selected foil promo card of Kyurem to expand your collection!