I stayed up late to watch Best Wishes hoping Dragon Selection news would pop up in a commercial, but nothing happened, so I’m posting this instead!

This week’s episode of Best Wishes in Japan featured the return of “Who’s that Pokemon?” – the segment has not been seen in Japan since the last Johto episode. The English version of Black & White has been using its own “Who’s that Pokemon?” since its first episode, so perhaps the Japanese thought it was a good idea and decided to do it themselves. The episode that aired today was “Underground Gym Battle! VS Clay!!” and the “Who’s that Pokemon?” was Excadrill, which Clay used in the episode. A screenshot is below.

The episode also featured a new ending, which revealed five changes to Ash’s roster and one change to Cilan’s (new evolutions and/or captures). You can see screenshots of the endings by clicking this link and this link (as opposed to spoiling you by posting them here in plain sight). Holy cow, Ash has now captured nine Pokemon in the Unova region, excluding Pikachu. 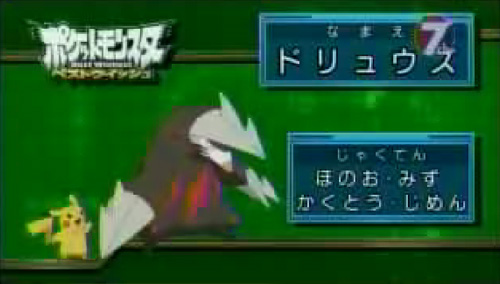