Update (12:45 PM) – Just noticed that Reshiram and Zekrom are Japanese; looks like the English ad used card images from Japan, which has happened a few times before. This means that the two will be coming to Japan at some point.

A new Next Destinies ad has revealed that the set will contain full art versions of Reshiram-EX and Zekrom-EX, which have yet to be released in Japan. This means for sure now that Kyogre-EX and Groudon-EX will be cut from the set (they will probably join Rayquaza-EX in a set or two).

The three-pack blister was also revealed, which will contain one of three holo promos (Luxio is pictured, which was originally a BW3 promo in Japan alongside Meowth and Riolu), three booster packs of the set, a sampling pack, and a coin. Click its thumbnail below for a larger image. 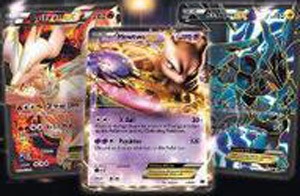 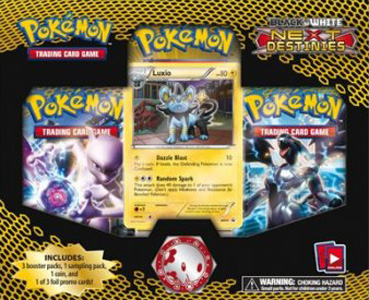