The official Japanese TCG site has revealed Darkrai EX (#044/069), Krookodile (#047/069), Zoroark (#049/069), and a new Trainer called Dark Patch (#064/069) from BW4 Dark Rush. Thanks goes to Bangiras for the translations and forum mod Viper.Fox for collecting the card images! The set will be released in Japan on December 16th and then Dragon Selection will come out a month later on January 27th. 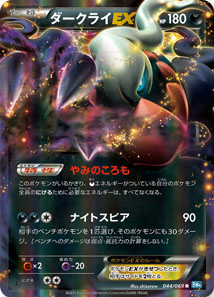 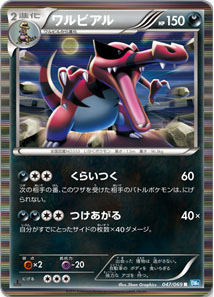 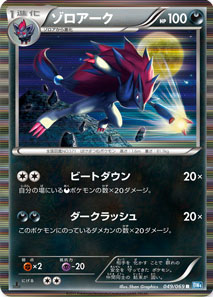 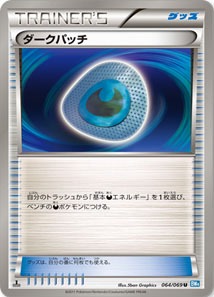 Ability: Darkness Cloak
As long as this Pokemon is in play, all of your Pokemon with any Darkness Energy attached to them have no retreat cost.

[D][D][C] Night Spear: 90 damage. Choose 1 of your opponent’s Benched Pokemon, and this attack also does 30 damage to that Pokemon. (Don’t apply Weakness and Resistance when damaging the Bench.)

[D][C][C] Dark Stab: 60 damage. The opponent’s Active Pokemon that was hit by this attack can’t retreat during your opponent’s next turn.
[D][D][C][C] Ride the Wave: Does 40 damage times the number of Prize cards you’ve already taken.

Choose a basic Darkness Energy from your discard pile and attach it to one of your Benched Darkness Pokemon.