In addition to the five set cards included in the preview tins (as seen in the news story below), three more Black & White cards have been revealed: Snivy (#1/114), Tepig (#15/114), and Oshawott (#27/114). As explained in the previous news story, the English cards are now using the Japanese card numbering system. Instead of the American way, which is to organize the cards first by rarity and then in alphabetical order, the Japanese system orders by type and then Pokedex number. So all of your Grass Pokemon cards will be first, followed by Fire-type Pokemon, and then Water, Lightning, Psychic, Fighting, Darkness, Metal, and Colorless Pokemon. This is why Snivy is the first card in the set: Grass comes first, and since it’s #001 in the Pokedex, it becomes the first card. Thus, Servine will be #2/114 and Serperior will be #3/114. 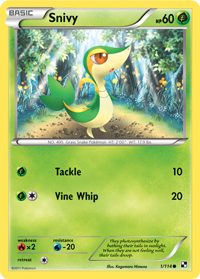 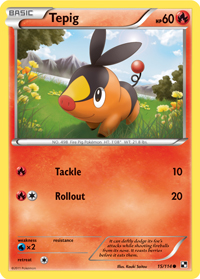 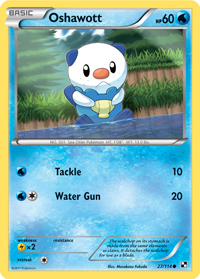