Three new cards have been revealed from Black Collection and White Collection, the two 53-card sets that will make up Japan’s first Black and White set. Kurumiru (1/53) is from Black Collection while Darumakka (#5/53) and Mijumaru (#11/53) are from White Collection. A few other cards from the sets have already been revealed, such as Tsutarja and Jalorda. As posted before, the sets will be released on December 17th in Japan; booster packs will come with only five cards, but for just 158 yen each (less than two bucks).

Additionally, if you buy a booster box of the sets from a store hosting a Gym Challenge tournament, you will receive a holographic Zoroark promo card. Translations of all the new cards are below courtesy of Bangiras! 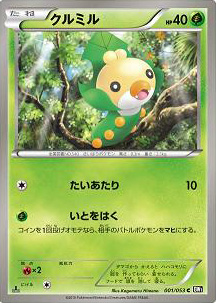 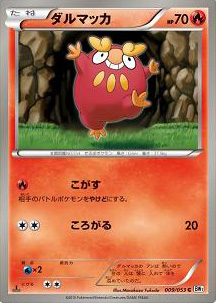 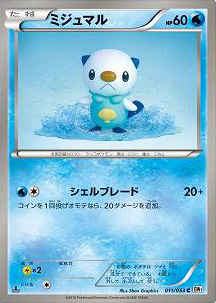 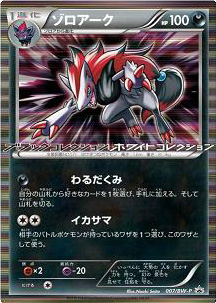 [W][C] Shell Blade: 20 damage. Flip a coin, if heads this attack does an additional 20 damage.

[D] Nasty Plot: Choose any 1 card from your deck and put it in your hand. Shuffle your deck afterward.
[C][C] Counterfeit: Choose 1 of your opponent’s Active Pokemon’s attacks, and use it as this attack.