So much news today. What a stark contrast to the past several weeks! Be sure to check out the Ken Sugimori artwork a few posts down – new ones have been added since the story was first posted.

Ken Sugimori artwork of many Black and White Pokemon have been leaking today, but the two Legendary Trios deserve their own news story! Below you can see Ken Sugimori’s rendition of Cobalon (Steel/Fighting), Terrakion (Rock/Fighting), and Virizon (Grass/Fighting) as well as Tornelos (Flying), Voltolos (Electric/Flying), and Landlos (Ground/Flying). The Pokemon will most likely keep their Japanese names for the English release.

The first three are based off the main characters from The Three Musketeers, with Cobalon being the father-figure or “leader” of the group, Terrakion being the strongest, and Virizion being the most feminine. Keldeo, the Water/Fighting horse that most likely won’t be revealed for several years, is their fourth member, the youngest, and the protagonist of the story.

The second trio, which are all male, are what we would now call the “Cloud Trio” and are based off Buddhist deities. Tornelos is based off Fuujin, the god of wind, while Voltolos is based off Raijin, the god of thunder – these are considered a duo in Japanese mythology. Landlos is based off Tsuchijin, which is not actually a classical deity, but a character who sometimes appears in modern media to accompany the other two since it seems like a logical extension of the other two (sky and earth). This is why Landlos is not with Tornelos and Voltolos in Pokedex order and why it has a different ability and stat distribution than the other two. Some fans have been referring to these three as the “Raijin Trio” (including us), but this is incorrect since only Voltolos is based off Raijin (it would be like calling the Kanto Birds the “Zapdos trio”). In mythology, Fuujin and Raijin are alternately portrayed as troublemaking demons (hence their Mischievous Heart ability), or as temple guardians who are so ferocious that they not only ward off evildoers, but scare apathetic people into becoming more devout. Considering that the Musketeer Trio fights humans too, it seems this generation has a theme regarding Pokemon versus humans. Thanks goes to Bangiras for researching this information! 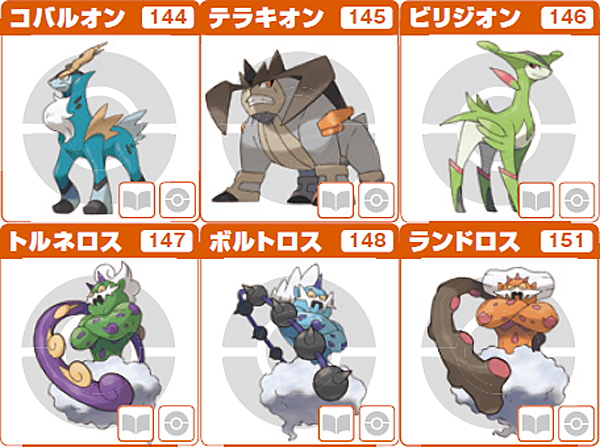