As we stated the other day, the webmaster of Pokexperto, Melkor, has been in contact with an internal Pokemon source who has leaked a ton of Black and White information to him. While we trust the information for the reasons stated previously, his source was validated on Monday when Melkor leaked a silhouette of the new purple cat Pokemon before the TV Tokyo advertisement in which it was shown appeared.

For the past week or so, Melkor has posted his own descriptions of several new Pokemon based on low-resolution images he has received and has also commissioned one of his website’s artists to draw fan art of the Pokemon (the fan art is a partial extrapolation of the Pokemon sprites and not completely accurate). All of his information and fan art images have been scattered across the Internet, but I have spent the last several hours talking to him and compiling it all into a list along with previously revealed information. Where official artwork or game screenshots are not used, it is the aforementioned fan art, which gives you a pretty good idea of what the Pokemon will look like.

Pokemon Without Numbers Yet 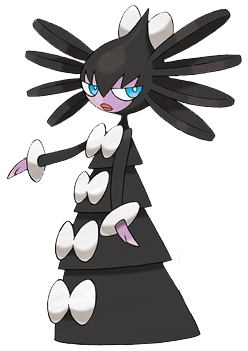