We have been sent an updated press release for HS – Undaunted, which you can read below. It confirms that the LEGEND cards in the set will originate from Clash at the Summit, being Kyogre and Groudon LEGEND and Rayquaza and Deoxys LEGEND. Since Houndoom is on one of the booster packs, our Primes will undoubtedly be Espeon, Houndoom, Raichu, Scizor, Slowking, and Umbreon. The press release also reveals that the set’s two theme decks, Daybreak featuring Espeon and Nightfall featuring Umbreon, will include a deck box and a booster pack of the set. These additional goodies will add an extra dollar to the cost of a theme deck, which will now rise to $12.99; this will likely be the trend from now on. 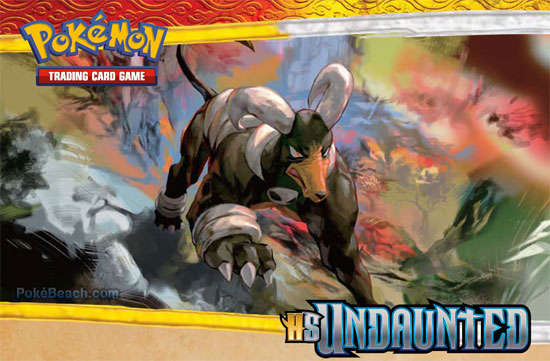 No Challenge Too Great, No Battle Too Fierce: HS – Undaunted

The greatest Trainers are those who are fearless in the face of battle. And that’s you! In the Pokémon TCG: HS – Undaunted expansion, you’ll discover battle-ready Pokémon just waiting to be summoned by the fearless Trainer in you! The powerful Rayquaza and Deoxys become a Pokémon LEGEND to be reckoned with… six Pokémon – from Raichu to Umbreon to Slowking – join the ranks of Pokémon Prime… and Stadium cards like the Ruins of Alph and Trainer cards like Legend Box change every player’s strategy. Are you ready to be Undaunted? HS – Undaunted features 90 new cards and remains compatible with previous releases.