A holographic Electabuzz (069/L-P) and Indigo Plateau (070/L-P) promo will be given out at Japan’s “Pokemon Center Open Battle” tournaments and July’s Gym Challenge tournaments. Both cards will be part of the upcoming Clash at the Summit set, which will be released on July 8th; they are stamped with the set’s logo. Translations of the cards are below courtesy of Bangiras. 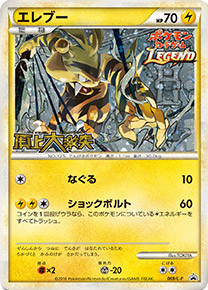 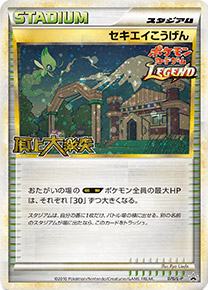 Indigo Plateau – Stadium
Each Legendary Pokemon in play (both yours and your opponent’s) get 30 more HP.
You can only play 1 Stadium card next to your Active Pokemon during your turn. If a Stadium with a different name comes into play, discard this card.