Pokemon Sunday just finished airing! For next week’s episode preview (May 9th’s), hostess Shokotan was shown holding up a poster with a question mark covering it, as you can see below. It was then explicitly stated that a new Pokemon from Pokemon Black and White will be revealed.

As with Zoroark, the show will probably only show a silhouette at first (on the 9th) and then reveal the Pokemon in full during their next episode (the 16th). However, CoroCoro magazine will probably have the Pokemon in their May 15th issue, which will likely be leaked on the Internet around the 10th or 11th. So, we should know what the new Pokemon or Pokemon forme is within the next two weeks! What could it be? Well, anything really… my totally “random” fan guess is a new Celebi forme. What’s yours? 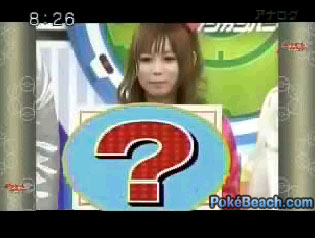